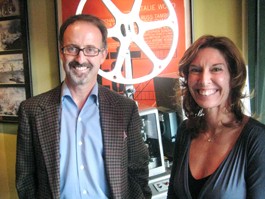 T he projection booth of a movie theater is always a cluttered area, but in the case of the one-screen Cameo Cinema in St. Helena, “cluttered” only begins to explain it.

Along with the projectors, the upstairs also serves as the business office, booking office, storage room and break area. Files for special events cover the walls above desks covered with order forms. Boxes are piled in corners, and file cabinets tower over what little walk space is left leading to the narrow staircase. It’s a bit like being inside a secret control chamber or a hidden outpost where important decisions are put into motion.

But downstairs, the part the general public sees, the Cameo is a veritable jewel of the Napa Valley. With candelabras on either side of a large curtained screen and just 140 cushioned wooden seats, the atmosphere is at once classic and intimate. Built in 1915, the Cameo boasts an art nouveau façade with a vertical sign and V-shaped marquee. It is the oldest continuously operating independent single-screen movie theater this side of the Mississippi.

One year ago, all of this teetered on the brink of disappearance when the Cameo was put up for sale. Since saved by new owners Shawn LaRue and Cathy Buck, the theater has risen from its imminent closure to now boast a program calendar almost as beautifully cluttered as this upstairs office, but filled with art films, family films, horror films, speaking engagements, 3D movies, live bands and, most recently, opera broadcasts.

“When we came on, we were committed to more than just film,” LaRue says, sitting in a nook of the Cameo’s upstairs office. “We were committed to fleshing out the art of storytelling. That, in our view, is a much more fundamental concern to people. People love to hear stories, and we realized that there are so many ways that people tell stories. Music. Opera. Dance. City arts and lectures. Film, of course—different kinds of film. So committing ourselves to that meant that we had to really expand. It was pushing a new paradigm.”

“We’re making this more of a town hall,” Buck adds. “We wanted to bring back that old sense of a gathering spot for people.”

And yet the Cameo doesn’t have a sterile, community-center feel. The walls in the lobby are painted a bright purple and gold; brass balustrades line the hall; the bathroom doors are labeled “Guys” and “Dolls”; and a faded poster found in the attic for a forgotten film called The Secret Nest adorns the lobby. In the back of the theater, serving as reminders of so many first kisses inside the Cameo over the last 93 years, are loveseats for two.

Touches like this ensure that loyal patrons will still enjoy going out for entertainment, even when the Cameo sometimes doesn’t have the multiplex muscle to open a movie until a week or two after its national release. While home entertainment is more available than ever, the perseverance of small one-screen movie theaters is undoubtedly one of the great American narratives. The story of the Cameo’s recent resurrection involves another American tradition: the exchange of information at the barbershop. LaRue was getting his hair cut when he heard the news.

“My head was in the sink, and—you know how the person who cuts your hair is on the pulse of everything?—it was just one of those, ‘Gosh, it’s really too bad about the Cameo,'” he recalls. “That was the news. I said, ‘What do you mean? What’s happening to the Cameo?'”

LaRue, who had never even worked at a movie theater before, let alone owned one, called up Buck, whom he’d met at a winetasting; the two shared common interests and a love for the movie Fiddler on the Roof. “And I said, ‘Let’s try it!'” Buck remembers. “Four months later, we were proprietors and stewards of this little sleepy theater.”

“One of the things that we really wanted to impress upon the community was that we were stewards of this space,” LaRue emphasizes.

That’s due in part to the fact that when the two purchased the Cameo, the theater had already been a beloved cornerstone of Napa Valley culture for decades. Once known as the G&G Theater, then the Liberty and the Roxy, the Cameo is an officially registered landmark building. Many valley residents remember their first movie or their first date at the theater. For Buck and LaRue to charge in and make drastic changes would have been disastrous.

But the new owners quickly decided that they needed to change two things: update the projection and sound system, and figure out a way to enhance programming. Those goals, it turned out, went hand in hand.

Buck shows off the theater’s new Barco digital projector, a large, black boxy thing that looks like a NASA module. Connected to it is a rack of different options for playback, with everything from BetaMax to BluRay. Next to the rack sits the future of movie-projection mediums: a hard-drive player, which more and more theaters have been switching to in recent years.

But LaRue and Buck honor filmmaking’s traditions with the theater’s Century Super Lume-X projector, a 35mm silver beauty that looks like it was made the same year that The Sound of Music came out. It’s still in routine use—not all films ship to theaters digitally yet—ensuring that the slowly dying art of film projection stays alive. In fact, to accommodate the platters that hold the large reels of film, they installed the large Barco on a special three-foot movable track so that it can roll out of the way when spools of film rush by.

The overhaul seems to have worked. In a county where residents are often starved for culture, reaction to the “new” Cameo has been overwhelmingly supportive. Earlier in the day, in fact, three people stopped by to say how much they loved the Cameo’s presentation the night before of the Royal Opera’s Carmen.

It’s through a grant underwritten by the nonprofit center Nimbus Arts that the Cameo is able to showcase much of its programming at low prices. Art films are only $5, and opera presentations, usually in the $20 range at other theaters, are just $10 thanks to Nimbus Arts’ involvement. “Their primary concern, in everything they do for us, is keeping the cost to the consumer down,” LaRue says. “They’ll do whatever it takes to support us to the point where we’re able to offer these things at a low price.”

Especially laudable are the Cameo’s live music presentations, a rare treat in an area hugely underserved by live music. A recent series paired live bands with a digital 3D viewing of U23D. And then there’s the Coppola connection. The Cameo has been the Coppolas’ hometown movie theater for years, and both Francis Ford and Sofia Coppola have opened films here. The Cameo recently did a Coppola series with prints from the director’s personal vault, and Eleanor Coppola appeared recently to talk about her latest book.

But change can be hard on some.

“St. Helena is still, I believe, in some way, used to the little Cameo being the sleepy little Cameo,” LaRue says. But appreciation is growing. LaRue laughs, “Honestly, there’s not a day that goes by that we don’t hear gratitude from the community. Initially, it was just ‘Thank you for keeping it open.’ But then we threw 20 balls up in the air when we first got our footing, creative ideas that we thought about and put out there. Some of them dropped, and some of them took flight and have prospered.”

He smiles. “It’s that programming model that people are talking about now.”