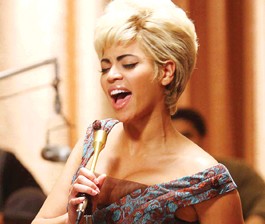 1. Shortly after Beyoncé sang “At Last” for the Obamas on inauguration night, Etta James angrily complained during a Seattle concert that Beyoncé “had no business singing my song that I been singing forever” and that the pop star was “gonna get her ass whupped.” What did James go on to say about President Obama?

a) “He gonna make up for it by dancing with me.”

d) “He’s taking over the banks and the car industry. He wants the country to fail.”

2. Which of the following singers did not collapse onstage in 2009?

3. In the hour after Michael Jackson’s death was announced, which one of the following misspellings of the pop star’s name occurred frequently enough to become a “Trending Topic” on Twitter?

4. Before Joe Satriani’s claim that Coldplay had stolen his music for their hit song “Viva la Vida,” a smaller Brooklyn band named Creaky Boards dismissed their own plagiarism claim against Coldplay, suggesting that both Coldplay and Creaky Boards had perhaps subconsciously lifted the music from:

a) The Legend of Zelda

5. What explanation did Snoop Dogg give for deciding to voice a GPS navigation system?

c) “I be ridin’ in cars, and I be hearin’ that boring-ass lady that be doin’ it all the time.”

d) “I be gettin’ paid for the stupidest shit these days.”

6. Despite the band’s history of taking on giant corporate interests like Ticketmaster and AT&T, which big-box store did Pearl Jam sign an exclusive deal with to carry their album Backspacer?

a) The Fame Monster by Lady Gaga

b) I Dreamed a Dream by Susan Boyle

d) This Is It by Michael Jackson

8. When U2 played a free November concert in Berlin to commemorate the 20th anniversary of the fall of the Berlin Wall, what did concert organizers erect to keep non&–ticket holders out?

a) a Greenpeace banner with Bono’s face on it

b) an abstract styrofoam sculpture

9. After Kanye West interrupted Taylor Swift at the MTV Video Music Awards, he took to his blog, twice, to issue an apology. Which following statement was not part of his apology?

a) “That was Taylor’s moment and I had no right in any way to take it from her. I am truly sorry.”

c) “EVERYBODY WANNA BOOOOO ME BUT I’M A FAN OF REAL POP CULTURE!!!”

10. After the Kanye-Taylor incident, fans worldwide pledged to buy Taylor Swift’s album in support. How many spaces did it jump up the Billboard chart the following week?

11. When the band MGMT accused French president Nicolas Sarkozy’s conservative party of using their song “Kids” in online videos without permission, what did the party offer the band in damages for copyright infringement?

a) a guest verse from Sarkozy’s wife, Carla Bruni, a French pop star of renown

b) the key to the Louvre

c) an invitation to perform in the courtyard at the Palace of Versailles, where Pink Floyd played in 1988

12. What did Lady Gaga wear when she performed for the queen of England?

a) a red latex, Elizabethan-style gown and sequined eye patches

b) a spaghetti-strap dress made from real, uncooked spaghetti

c) a replica of the dress Liza Minnelli wore in Cabaret

13. “Right Round” by Flo Rida topped the U.S. singles charts for six straight weeks. Which 1980s group does it heavily sample?

b) Dead or Alive

14. In a letter to Congress in March, Billy Corgan of the Smashing Pumpkins wrote to support the proposed Ticketmaster / Live Nation corporate merger, stating that “This is a new model that puts power into the hands of . . . “

d) “my manager, Irving Azoff, the CEO of Ticketmaster.”

15. At the Grammy awards, M.I.A.’s live performance of “Swagga Like Us” with Lil’ Wayne, T.I., Jay-Z and Kanye West was noteworthy because:

a) she has publicly announced that all four men are assholes

b) she performed while nine months pregnant

c) she threatened to bow out in solidarity with Bollywood composer A. R. Rahman

16. In January, Maryland landowner William Zantzinger, demonized in an early Bob Dylan song, died. Which song was it?

17. The surviving members of the Grateful Dead this year finally agreed to license their first-ever sanctioned sample. Phil Lesh “loved the track” it was used for. Which artist acquired the rights?

18. The country of Malaysia made headlines this year with its restrictions on touring artists like Rihanna, Fergie and Beyoncé who choose to:

a) support the United States

20. What did Paul McCartney call “a prime contender for mistake of the decade”?

a) the continued unavailability of the Beatles’ music on iTunes

d) his marriage to Heather Mills

21. At the beginning of the year, Apple announced that iTunes would offer song downloads without DRM encoding, which limits the number of times a song can be copied. Apple conjunctively offered to remove existing DRM encoding on songs already downloaded, for a fee. An existing music library containing 3,256 DRM-encoded songs, for example, would cost how much to remove the scramble?

22. In December, a major U.S. newspaper issued the correction that a Nov. 26 article “incorrectly said a Public Enemy song declared 9-11 a joke. The song refers to 911, the emergency phone number.” Which paper was it?

a) The New York Times

23. In August, Bob Dylan was picked up by New Jersey police after a call reporting an “eccentic-looking old man” wandering in people’s front yards. What did the officer, who didn’t believe he was actually Bob Dylan, say afterwards?

a) “Now, I’ve seen pictures of Bob Dylan from a long time ago, and he didn’t look like Bob Dylan to me at all. So I put him in the back of the car.”

b) “I wasn’t sure if he came from one of our hospitals or something.”

c) “He was acting very suspicious. Not delusional, just suspicious. You know, it was pouring rain and everything.”

d) all of the above