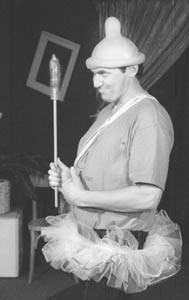 Like the mutant bastard offspring of Lenny Bruce and Alfred P. Newman, this very loosely structured comedy–currently being staged by Actors Theatre–boasts a weird blend of in-your-face political exhibitionism and potty-mouthed social satire, laced with giddy repetitions of the show’s title and main character: Poona the Fuckdog.

Played with admirable enthusiasm by Ariana Kaiser (she’ll be succeeded in mid-June by Jorja Dwyer), Poona is a pajama-and-negligee-clad puppy-dog who lives in the magical kingdom of Do. Or is that Doo?

In the first of several stories, read from an oversized book by a rotating roster of narrators, Poona tries to find someone to play with her. Alas, because she is a “fuckdog” (a label that initially hints at Poona’s sexual drives but quickly evolves into a euphemism for “working class”), Poona’s only friend is a co-dependent rabbit (the versatile Sallie Romer, who, in subsequent tales, plays a maniacal television set, and a precocious girl seduced by a bloodthirsty computer).

Poona is visited by Fairy God Phallus (Tim Earls, with a large condom on his head), who shows her how to win friends with her big pink box–literally, a big pink box, which a parade of fairy-tale creatures are eager to jump into for instant noncommittal fun.

One of these partners is the Handsome Prince (Eric O’Brien, whom discerning theatergoers may recognize as Nick Twisp in Odyssey Theater’s recent production of that other notable potty-mouthed farce, Youth in Revolt). The Prince, handsome or not, treats Poona badly, using her and forgetting her, repeatedly, until she gets over him and becomes a Heisman Trophy-winning sports hero with heavenly dispensation to kill people.

The Prince, meanwhile, goes mad and detonates a nuclear bomb in the Kingdom of Do, killing everyone except the two lost aliens Jasper and Cunt and sending himself to Hell, along with one randomly selected member of the audience.

If any of this makes sense, I’m not describing it properly.

If, however, it sounds like good, unorthodox fun, I’m doing better. The ensemble cast is uniformly excellent, and the direction by Dwayne Stincelli is wisely fast-paced, peppered with interactive elements such as the second-act distribution of cookies and condoms.

Though not nearly as smart as it wants to be, the script (by Goode, a smarty-pants theater cult-god) is frequently funny, laced with interesting philosophical pronouncements. God, for example, allows Evil to exist because Evil, it turns out, is cheaper than air conditioning. Speaking of God (Peter Downey), one of the play’s best revelations is that in Heaven, if you can stump God with a question he can’t answer, you win 500 dollars.

The hint that Poona might actually be a metaphor for O. J. Simpson is certainly strange, but no stranger than anything that precedes it.

One final note: An Internet search reveals that on May 19, the day Nicole Simpson was murdered, six people were poisoned by a “magic pill” they were promised would make them invisible. This true story took place in the town of Poona, India.