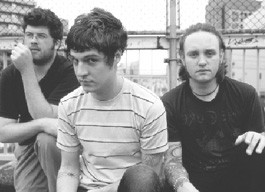 It’s almost midnight outside the Velvet Teen’s rehearsal space tucked among the rolling Petaluma hills. As a huge, blood-orange full moon perches low on the horizon, the packed and ready band do a final check to make sure they have everything for the airplane. The next day, they leave to play one show–in Singapore.

As to offering any insight on what this thundering new direction means, the band members are mum about it. “I wanted to keep a pretty vague or ambiguous atmosphere,” says 25-year-old frontman Judah Nagler. “I think it means more to people when it’s not so up-front and easy to figure out. If anyone gets anything from it, it’s something they’ve made themselves.”

“It’s kind of like eating the same food for four months straight,” Nagler says of working on Elysium, “and having to critique it every step of the way. At the end of four months, you just want to go in the opposite direction. I wanted to make something that was more in the Warp Records vein–like Squarepusher or Aphex Twin.”

A huge force in this shift–due in great part to his willingness to collaborate with electronics–is the addition of drummer Casey Deitz, who must be seen to be believed. A manic hybrid of Elvin Jones and Slayer’s Dave Lombardo, propelling songs like “Rhodekill” and “Tokyoto” with dizzying polyrhythm, Deitz is a humble monster who says he’s still not sure if his style fits in with the band. But when the band’s founding drummer, Logan Whitehurst, left to successfully battle a brain tumor, Nagler seized the opportunity.

“I’ve been wanting to do the electronic thing in the band for a while,” he says, “but I hadn’t really had that opportunity until Casey showed up. He’s been totally open to all kinds of new stuff.” Deitz’s enthusiasm for playing along to prerecorded electronics piped in through headphones has energized the ensemble beyond any previously explored limits. As a result, their live shows are now palpitating exercises in sensational overload.

When the first siren sounds of the album’s opener, “333,” echoed throughout the Great American Music Hall in San Francisco earlier this year, the sold-out crowd couldn’t have been less prepared. Nagler rocked back and forth in a crazed litany of otherworldly howls, accosting both crowd and self with a wild, lilting venom. Deitz thrust the songs to unimaginable planes on a full tank of unleaded insanity, while Josh Staples, the tethering anchor to this fervent upward spiral, stood formidably behind his bass as a compensating vestige of worldliness, somehow keeping it all grounded.

Staples himself is surprised at the band’s newfound ability to tackle such demanding material. “These songs are really fun, and very challenging,” he says outside the practice space. “They’re really dexterously difficult, so the first two months of practicing were really grueling. And we’re better because of it.”

Nagler himself cites moving to Petaluma after a stifling year of living in San Francisco’s Tenderloin District for this rush of productivity. “I feel like I kind of went a little crazy in San Francisco, just because we didn’t really have much space to play music,” he says, noting that he was also working too much to develop his continuously stockpiled song ideas. “All those things made for a strange year,” he adds. “Things have gotten a lot better since we moved [back].”

Nagler has a history of revising projects up to the last minute (he notes that his solo electronic album, Atair, has “been in a perpetual state of ‘almost done’ for the last three years”). But a relocation has given him a burst of energy. “I’ve been getting pretty complex projects done on a deadline,” he says. “It’s really made me learn what’s important to care about and what’s not important to care about, too–what you’ve got to let go of.

“I kind of felt like I was being led more when I was writing Elysium,” he continues. “I was reading all this weird shit and feeling like I had a definite strange divine path that I was following.” Now, he says, on the eve of a flight to play a show across the world, armed with a set list of daring new songs, nothing is holding his reins.

“I haven’t really been feeling that led by anything,” he says. “I’m just going. I don’t know how else to describe it.”