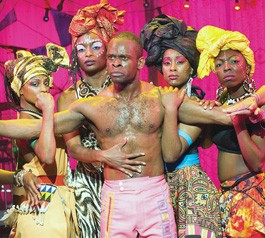 How many wives did Fela Kuti have? A common misconception is that he was married to each and every one of the 50 or so topless women featured on the cover of his 1970 album Shakara, but that would be overestimating the afrobeat pioneer’s marital reach—which, surprisingly, is one of the few aspects of Kuti’s life capable of overestimation. The musician, saxophonist, singer, bandleader, political activist and lunatic-genius fencesitter’s life is the stuff worthy of Broadway musicals, and that’s exactly what’s coming to the big screen as a London production of Fela! is broadcast for two nights at the Sixth Street Playhouse in Santa Rosa as part of Rialto Cinemas’ Rialto on the Road series.

Rarely overlooked amid the sensational stories of Fela’s political resistance—and formation of his own commune in Nigeria called the Kalakuta Republic—is Kuti’s incredible music, which takes center stage in Fela! Often as long as one side of a long-playing LP would allow (about 25 to 30 minutes), Kuti’s compositions build slowly but menacingly over insistent bass lines, angular horn riffs and the solid presence of drummer Tony Allen. Fela himself usually spat out gruff exhortations against his government, as in “Coffin for Head of State” and “Original Sufferhead,” and the female members of his band often echoed his unbridled verses in highlife response.

In 1978, in a ceremony performed by a Yoruba priest, Kuti married all 27 of those female band members, a union that lasted until Kuti’s release from prison, in 1985, when he stated he no longer believed in marriage and divorced the 12 women who had remained with him. Knotty as it may be reconciling Kuti’s personal life with his musical output—he recorded over 50 albums, all of them worthwhile—Fela! tackles the task with both criticism and respect. Funded in part by Jay-Z and Will Smith and featuring the crackerjack band Antibalas, the National Theatre in London’s production of Fela! screens Monday and Tuesday, Jan. 17 and 18, at the Sixth Street Playhouse. 52 W. Sixth St., Santa Rosa. 7pm. $15&–$22. 707.539.9771.

May 27: Seth Meyers at the Uptown Theatre