Play With Your Food at Square Belly Food Theater 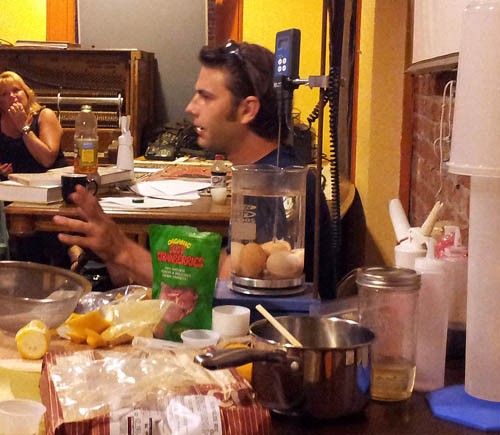 It’s cool to play with your food. That’s the mantra behind Square Belly Food Theater, a series of monthly workshops being held at the Arlene Francis Center in Santa Rosa. The most recent one on Oct. 3 featured chef Chris Hanson and food writer Heather Irwin showcasing molecular gastronomy techniques. Despite the fancy science words, it’s actually pretty easy to mess with the traditional way foods are served. And it can be damn impressive, too.

The demonstrations began with lemon powder. This would be easy enough to purchase at a local spice shop (there are two in Santa Rosa), but it’s much more potent and impressive when made at home. This is good to stir into recipes where liquid would throw off the scientific reactions of the dish (baking, for example) or as an interesting kick as a garnish, like on the rim of a lemondrop martini.

Basically, it involves peeling a lemon, scraping the white interior off and drying the peel in a food dehydrator. Hanson says these are for about $20 at local stores and probably online as well. I know they are often available at larger thrift stores for less. Throw the dried peel into a spice grinder (they used a bullet-type coffee grinder) and voila, lemon powder. This can be done with any kind of dried fruit, even pre-dried fruit, as long as it’s brittle.

Next was 63-degree eggs, cooked sous vide. Pronounced “soo-vee,” this cooking technique heats water to a certain temperature using an electric hot plate and cooks vacuum-sealed food in the hot water. Since it never goes over the desired temperature, overcooking is not a problem, and food can be made to a very precise doneness. Meat is often prepared this way, but at 63 degrees Celsius an egg becomes cooked evenly. Since it’s already in a vacuum shell, all one has to do is control the temperature and put in the eggs. The result is an “elegant poached egg,” where the albumin (white part) is the same consistency as the yolk.

The most impressive feat of the night was vegan caviar. I get a kick out of things that mimic other things but in fact are completely unrelated to the thing they’re mimicking (trying saying that 10 times fast!). This balsamic vinegar looked just like black caviar, but could be made completely vegan, using no animal products at all. Hanson also demonstrated the technique with Sriracha hot sauce, making spicy red caviar.

It’s about timing with this one. There’s a time in the Jello making process when it’s not Jello yet, it’s just viscous, colored liquid. That time window is exploited here. Hanson made clear gelatin (agar agar can be used for vegan substitute), poured balsamic vinegar into it and, while still warm, poured the liquid into a squeeze bottle with a small tip. This will be dripped into cooking oil that has been placed in the freezer for a bit. Though he had a tall graduated cylinder, it’s fine to just throw a whole tall bottle of vegetable oil in until it’s not quite frozen, but still very cold. Drip the balsamic gelatin liquid into the semi-frozen oil and the gelatin cools instantly, forming little spheres that can be strained out when finished. The oil can be strained and re-used without taking on any flavor from the “caviar.”

The series continues with John Lyle and the Secret Life of Pie Crust at 6:30pm Nov. 7 at the Arlene Francis Center. Cost is $20 or “whatever you can pay.” As someone who has tried and failed miserably at making pie crust, I will probably be attending this workshop. I also want to know how to use lard in a crust, because why not get animal fat into everything you can?

Techniques of top-notch chefs don’t have to be shrouded in mystery. It’s actually possible to do this stuff at home. And after doing so, it creates more appreciation for those great chefs and opens doors to new, exciting possibilities for home hobbyist cooks.