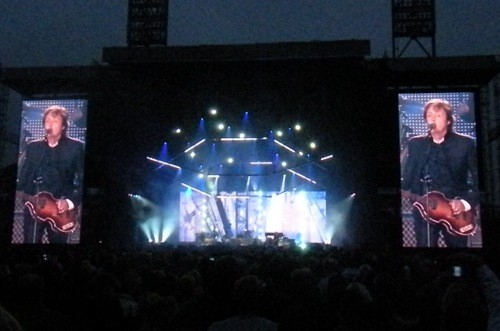 Paul McCartney’s first show in San Francisco proper since the Beatles’ final show in 1966 got off to a poor start, with an hour-long delay and a glaringly down-tempo opening medley of obscure songs from Wings, McCartney’s other popular band. But soon Macca and his crack band of expert players half his age were dazzling the sold-out ballpark with extremely faithful renditions of his half-century catalog. He was in excellent spirits and decent vocal shape, and as affable as ever, despite the surprisingly cold weather, which he mentioned more than a few times.

While the set was heavy on Wings tracks and his recent work (including tracks from electronic project The Firemen), the Beatles songs were of course the highlights. Notable this time around was the debut of the White Album gem “Ob-La-Di, Ob-La-Da”, “I’m Looking Through You” from Rubber Soul, the classic rocker “Daytripper”, and a rollicking take on Let It Be’s “I Got a Feeling”. McCartney didn’t fight the consensus, with tributes to deceased band mates George Harrison (a sufficient “Something”) and John Lennon (a truly exhilarating “Day in the Life/Give Peace a Chance”).

Despite his tightly mapped-out show, McCartney did inject a bit of improvisation into the mix, first by way of his rainbow piano malfunction (“I like this one better anyway”) and a charming run-through of “San Francisco Bay Blues”.

Along with the psychedelic & Warholian imagery and personal Candlestick ’66 remembrances from the mostly 50+ crowd, the amazing songs made for a genuine 40th anniversary of the Woodstock era. Conversely, the state-of-the-art, endorsement-drenched ballpark and ticket prices to match (ranging from $49 to $250 a piece) illustrated where much of that 1960s idealism went. Last Saturday’s show was certainly light years from the primitive Beatles’ early stadium gigs, especially the pyrotechnics during “Live and Let Die”, a reminder that in a venue, big gimmicks are a necessary to a certain extent.

The explosions were also a much-needed late-show jolt before the set-closing “Hey Jude” and non-stop Beatles cuts that followed. The back-to-back “Yesterday” and “Helter Skelter” were the finest reminders of McCartney’s songwriting range and his importance in music history. When it comes to vital veteran performers, McCartney’s no Stevie Wonder but he’s absolutely worth seeing live…if you can afford it.–David Sason

Got to Get You Into My Life

Let Me Roll It /Foxy Lady

The Long and Winding Road

I’m Looking Through YouTwo Of Us

Band on the Run

Back In The USSR

I’ve Got a Feeling

A Day In The Life / Give Peace a Chance