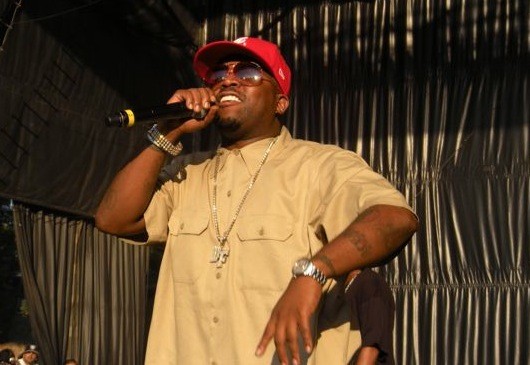 All other photos by David Sason.

The traveling hip-hop festival Rock the Bells came to the Bay Area yesterday, with over two dozen acts over two stages, but cancellations plagued the final date of the tour. Common was a no-show, as was Raekwon. The latter showed up briefly during Big Boi’s set of mostly Outkast staples, but it was a letdown next to the new tracks off the highly anticipated Only Built 4 Cuban Linx II he was reportedly scheduled to perform. A surprise 30-minute set by legend Slick Rick was the talk of the fest, but many attendees heard of the news afterward.”You are about to witness history,” announced emcee KRS-One before the headlining set from “God’s son” Nas &”Bob’s son” Damian “Jr. Gong” Marley, and they certainly ruled the evening with big hits, big energy and crowd engagement. Opening with “Hip-Hop Is Dead” and moving through gems from “The World is Yours” to the inspirational “I Can” to an exhilarating & conflicted “One Mic”, Nasty Nas proved his headlining mettle with unrelenting, clear delivery. Marley – with his incendiary dancehall jams & flag-waving onstage spectacle – was particularly forceful following a day of straight hip-hop tunes and sparse stage setups. Highlights were his already-classics from 2005’s Welcome to Jamrock and new songs from the oft-delayed collaboration Distant Relatives(Now Nas says “sometime this year”). When it finally does drop, the Nas & Damian Marley show is a must-see.–David Sason

The Evolution of the Blues