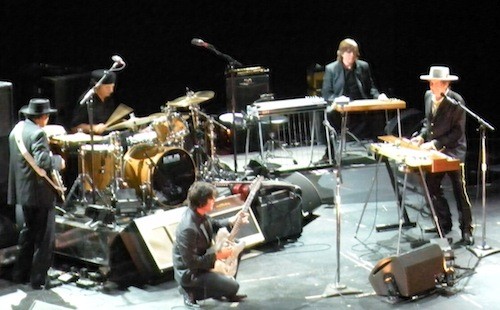 The best part about seeing Bob Dylan in concert in the 21st century is exactly that – seeing him. That still-formidable thrill was enhanced by the small venue size Wednesday night. Although the last-minute, cash-only downtown show fell short of capacity expectations (the venue was about 80% full at best), the “poet laureate of rock” and his incredible band played a tight, focused 90-minute+ set that relied surprisingly much on latter-day gems, including the rarity “Man in the Long Black Coat” from 1989’s Oh Mercy.

This setlist choice made Dylan’s usual gruff, garbled delivery less disconcerting. “Ain’t Talkin’” was much more enjoyable than the preceding “Highway 61 Revisited”. Instrumentally, he certainly kept up with his outstanding band, especially when his organ playing dueled with Charlie Sexton’s guitar licks during a dynamic run-through of “Thunder on the Mountain”, easily the highlight of the show. By the closer “Like a Rolling Stone”, it was clear that the Bob Weir cameo rumors were false. But judging from the crowd going apeshit when Dylan merely grinned midway through his classic anthem, it didn’t matter one lick.—David Sason

Man In The Long Black Coat

Most Likely You Go Your Way (And I’ll Go Mine)

Thunder On The Mountain

Ballad Of A Thin Man