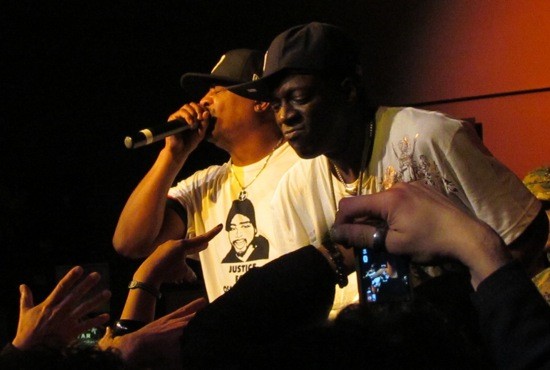 Photos and review by David Sason

The first time I saw Public Enemy in concert, December 2006 at Mezzanine, was undoubtedly my biggest letdown as a concertgoer. After an energetic opening portion referencing the legendary shows I’d watched on VHS throughout my youth, the show was quickly derailed when hype man Flavor Flav – at the height of his reality TV popularity – took over the show for over an hour. He played every instrument onstage, rambled endlessly, and even filmed a video for his solo track “Unga Bunga Bunga”. It was in the middle of the week and already 2am, so I left the show to go listen to some PE records.

Thankfully Saturday’s sold-out 10pm show, the last of four at Yoshi’s in San Francisco, more than redeemed Public Enemy as an incredible live act and still the best way to celebrate the Martin Luther King Jr. holiday. Still in the midst of their Fear of a Black Planet 20th anniversary extended tour, they hit the ground running with a lively “Brothers Gonna Work It Out”. Before continuing on the Fear tracks, though, the momentum was stalled by a 10-minute-plus talking portion that saw Flavor Flav playing an extended game of call and response with the crowd (think a Freddie Mercury who can’t sing).But this led directly into “911 Is a Joke”, which started an impressive run of hits and album tracks mostly from their late 80s/early 90s hey day. Unearthed rarities were among the highlights of the show (“Terminator X to the Edge of Panic”, “Power to the People”, “Burn Hollywood Burn”), with all tracks receiving tasteful accompaniment from the backing live band (not drowning out the Bomb Squad sound collages completely like before).Flavor was once again complementing the show instead of wielding it, allowing longtime fans to forget his television career altogether (despite a thank-you speech to all “Flavor of Love” viewers, ironically preceding a snippet of “She Watch Channel Zero?!”). Brandishing a “Justice for Oscar Grant” t-shirt, leader Chuck D delivered on the political rhetoric, specifically the immigration and extremist shooting of Arizona, which segued into a sparse yet intense run through of “By the Time I Get to Arizona”.The hip-hop legends relished the small club setting throughout the night, which made the two-hour-plus performance a two-way love fest. It was a joy in particular to see Chuck D having such a good time: finding a Harry Allen fill-in in the front row for the ending line of “Don’t Believe the Hype”; grabbing cameras and taking snapshots for endless audience members; and playing panhandler to Flav during “Can’t Do Nuttin’ for Ya Man”, just one song in a last-minute show extension.While no longer packing arenas, PE rocked Yoshi’s like it was one, exuding a pride and professionalism that’s missing from most live performers, especially hip-hop and veteran acts. I never thought I’d say this, but I can’t wait until the next Public Enemy concert.–David Sason*