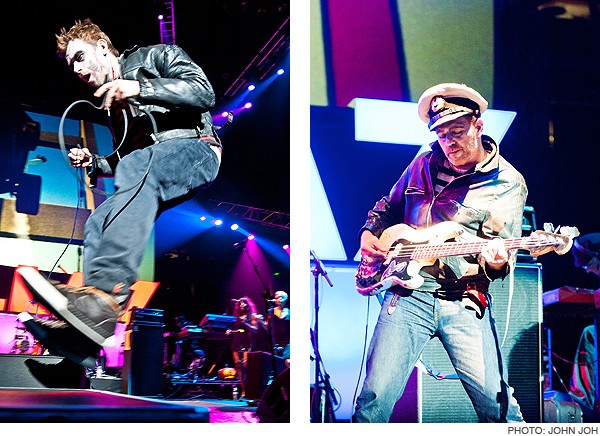 I’m not sure if there’s a fancy plural form for “legend”, but there should be, just to accurately describe Gorillaz’s Escape to Plastic Beach Tour, which dazzled Oakland on Saturday. While not filled to capacity, the costumed crowd was enthralled from start to finish not only by Jamie Hewlett’s inventive animation (projected on a giant screen behind the performers) , but also musical pioneers as diverse as Bobby Womack, De La Soul and The Clash’s Mick Jones and Paul Simonon (whose sailor outfits inspired clones throughout the arena). The spectacle’s ringleader, of course, was Gorillaz mastermind Damon Albarn, who engaged the crown nonstop, seemingly relishing the stateside arena-size audience that his Blur could never draw.

While Lou Reed didn’t  show up like he did at the preceding L.A. show, it was incredibly exhilarating and surreal – yet oddly appropriate ­- to see De La Soul flanked by The effing Clash, who bopped along during a euphoric “Feel Good, Inc.”. In fact, while not as earth-shattering with its output, Albarn’s Gorillaz best symbolize The Clash’s mission for unbridled musical amalgamation, evident from the orchestral “White Flag” (which featured a septet of local Arab-American musicians) to the sci-fi gospel of epic closer “Demon Days”.

More photos and setlist below.

the World of the Plastic Beach (with Hypnotic Brass Ensemble)

Eastwood (with Bashy and Kano)