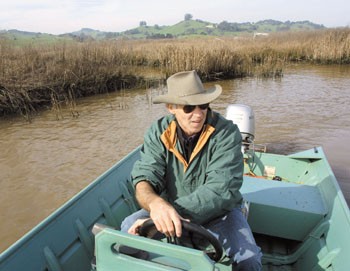 Art in the Marsh

The glistening mud flats of Gray’s Field at low tide are a slick, mucky wonderland. Slit open here and there by narrow channels, the flats are illuminated by intermittent shafts of yellow sunlight seeping in through breaks in the gloomy, gathering clouds. The surface of the mud is stamped with crisscrossed hieroglyphics created by bird feet.

Just beyond the flotsam-littered levee, the Petaluma River moves slowly back in from San Pablo Bay, meandering past the riotous bird sanctuary of Shollenberger Park, which spreads out to the north, immediately adjoining the bird-covered marsh at the edge of which I now stand.

Glancing in the direction of Shollenberger–Petaluma’s most frequently used and probably most ecologically important public park–I can see joggers, dog walkers, and bird watchers making their way along the gravel pathways that lead to the river.

From where I stand, a softball’s toss from a mob of shrieking seagulls feeding on the flats, I can trace my deep bootprints through the mud back to the trail I descended to get here. As the tide begins to return, those indentations will fill up with the water trickling in through a 30-foot breach in the levee.

A pair of ultralights swoop low over the marsh, emitting an insectlike buzz and casting shadows that startle the birds, stirring them into a cyclone of winged pandemonium.

Other than the planes and the noise of the gulls, the only sound is the eerie roar of the wind in my ears. What seemed to be a relatively small expanse when spied from the Shollenberger trail now seems immense, remote, dangerously wild.

It’s the perfect place for an art show.

“I like very physical experiences,” says artist Patricia Johanson. “I like experiences that put you right in the middle of nature, rather than leaving you standing on the edge as an outsider looking down on nature.”

Mainly interested in environmentally sensitive areas, Johanson crafts projects that combine nature trails and freeform sculpture, weaving together the familiar experiences of being at a public park or attending an art exhibition with the thrill of having landed in the midst of messy, unpredictable wilderness.

Johanson’s creations dot the globe, ranging from the “sculptural playgrounds” of The Rocky Marciano Trail in Brockton, Mass., to the Millennium Park in Seoul, South Korea, which turned the world’s largest landfill into a vast figure of a nature guardian, interlaced with terraced areas for recreation and meditation.

Johanson’s other projects include the linear Endangered Garden in San Francisco and Fair Park Lagoon in Dallas, Texas, a hard-to-describe ecological artwork that includes paths, bridges, seats, and animal islands, all designed to resemble the curves and entanglements of indigenous plants and insects.

She has also created such enormous projects as the Park for the Amazon Rainforest and Kenya’s Nairobi River Park. The latter, built on what was once among the most polluted rivers on the planet, employs specially selected vegetation and ingenious sculptural installations to filter and purify the river water.

As part of the historic agreement reached by the Petaluma City Council in January, Johanson will be designing a wetlands experience for the tidal lands and pastures of Gray’s Field.

That’s presuming, of course, that enough money can be raised through grants and private donations to purchase the land and build the park.

The effort is connected to the city’s proposed $88 million wastewater treatment plant, which will include an environmentally friendly wetlands filtration process of filtering and removing algae.

The proposed marshland park is tentatively titled The Trail of Tides and will eventually link the Petaluma Marina to Shollenberger Park, continuing out to the bay and playing a vital role in the city’s treatment and purification of water.

It will also be fun.

Or so says David Yearsley, chairman of the Petaluma River Maintenance and Enhancement Committee, one of the project’s most committed advocates.

“It will be an interactive park with interactive experiences,” Yearsley explains. “The changes in the tide will determine what kind of interaction you have with the park at different times.”

But don’t slip on your mud shoes just yet.

“It’s not a done deal,” says Petaluma City Council Member Janice Cader-Thompson. “The property has to be acquired [the land is currently owned by Petaluma Poultry Processing], but the city is moving forward to work with PPP and I feel comfortable and confident that this will happen.”

Estimates put the price tag for the park, which includes the cost of the land, at a minimum of $3 million. Under the terms of the agreement reached by the city council, that money must come from sources outside the city’s coffers.

According to Cader-Thompson, if fundraising is successful, the remarkable art trail through the wetlands should be at least half finished by the time the new treatment plant goes on line in 2006. If the funds have not been locked down within a year, however, the city could choose to allow development on the land instead. And Cader-Thompson would hate to see that happen.

“We have a rare opportunity to do something that most communities would leap at,” she says. “We can create a park that people will travel from across the world to see, while also creating a wastewater facility that will be a model for future communities around the country. It’s clearly a once-in-a-lifetime opportunity.”

What isn’t clear, however, is exactly what the finished park will look like.

“I have my own vision,” says Yearsley. “But like most people, I don’t have a clue what this art installation will look like.” Earlier reports suggested a layout that, when viewed from the sky, would resemble a giant chicken head.

Describing one design she’s considered, Johanson envisions walkways and staircases that lead through the marsh during low tide and then become cascading waterfalls, transforming the park as the water rises.

“I want to design a way for people to walk out along the levee,” she says, “which is really an amazing experience, because you are so close to the river. When you walk Shollenberger, you are on a raised path, and you’re really quite far from the wetlands; you are removed from it, you are above it, in a God-like stance, looking down on all the activities of nature.

“I want to put you right down into nature,” she adds, “to give you a different sense of how you are connected to all of these birds, to the water, to the land. So you see the power of nature up close and personal.”

Despite living on the other side of the country, Johanson has come to love the tidal plains of the Petaluma Marsh. She’s pained by the thought that the park might not happen, that the rare experience of walking among the tides might be lost beneath end-to-end industrial complexes.

But Johanson has reason to be optimistic.

“One thing you can say about Petaluma,” she says. “It’s got the smartest people in the world. Petalumans are so well-educated, so well-versed in the issues, so aware of all the importance of sustainability issues, they just blow me away.

“They’re smart enough, most of them, to understand what they’re going to lose if they don’t do this.”

Doc of the Bay