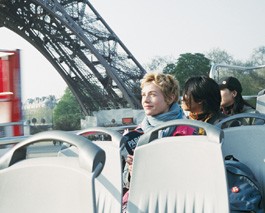 Artists, patrons and fans meet in a traffic jam on 'Montaigne'

A few years back, Amélie gave us the idea of a gamin rehabilitating Paris. OK, let me phrase that: Amélie reinforced the idea most of us have of Paris, as a celestial city pearly with clouds, a place of permanent residence only for the very lucky living and the celebrated dead.

Director Danièle Thompson’s Avenue Montaigne isn’t going to rouse us out of that swoon. Give it credit for an intellectual zest missing from Amélie, even in a similar story of a girl blessing hard-working artists and art lovers.

“You’re a ray of sunshine,” says the grandmother of the heroine Jessica (Cécile de France), and Thompson (La Bûche, Jet Lag) treats Jessica as if that’s what she were, illuminating and warming the people she passes by. Jessica’s grandmother has a story she likes to tell about how she managed to rub up against the presence of wealth by getting a job at the Ritz. Her granddaughter, in town from her home in Macon, has a short haircut, a tight T-shirt and enough overbite to make her look like a friendly squirrel. She talks her way into a waitress job at the Bar des Teatres on Avenue Montaigne.

The bar is at a nexus of two theaters and an auction hall. Barkeeper Marcel says he’ll break sacred tradition that says only men shall be garçons, and bring Jessica as a temporary waitress. He has no choice; there’s a perfect storm brewing of cultural events all on the same night: an art auction, a performance by the renowned pianist Jean-Francois Lefort (Albert Dupontel) and the opening of a revival of Feydeau’s farce Mais n’te promène donc pas toute nue. (My translation is “Don’t Run Around Naked Like That,” but anyone with a real grasp of French can surely do better.)

As a waitress, Jessica is privy to the problems of the three people deepest involved in these happenings. Take the leading lady in the Feydeau, a renowned soap-opera star. Catherine (Valérie Lemercier) is as impossible as Barbra Streisand. She drives her director nuts trying to find the psychological realism in a play that needs to be performed like a Monty Python sketch in order to work.

Catherine’s ordinarily prickly temperament is worsened when she learns that the American movie director Brian Sobinski (Sydney Pollack) is in town, trying to cast the leads in a Sartre biopic. The process is underway, as we can see from a shot of a line of auditioning actors on a bench, all trying to look rumpled, preoccupied and wall-eyed. Catherine knows she’s Simone de Beauvoir, damn it, and makes herself miserable trying to land the role.

On her rounds, Jessica brings mint cordials to the pianist Jean-Francois. He is dying inside; he’s overbooked and deeply sick of the pomp surrounding the world of classical music. His wife, who is accustomed to his nerves, can’t take his outbursts seriously. And she refuses to listen to his complaints that he’s being smothered.

Jean-Francois’ acquaintance Grumberg (Claude Brasseur) must be suffering something similar, since he’s liquidating his collection of modern art. Grumberg is a rarity in French cinema–a self-made millionaire who doesn’t have a single crime in his background. Having risen up from a taxi driver to become an airline magnate, he’s now getting rid of the treasure-trove of art he and his late wife collected on a whim. Grumberg is amused by the circumstance: “I’m selling these paintings, but I couldn’t afford to buy them.” Grumberg’s bitter son Frederic is angry enough at seeing his patrimony on the auction block, but he has another barb in him: the old man is also carrying on with a girl half his age.

I suppose no one deserves the Legion of Honor for making Paris look good in a movie, but Thompson demonstrates special taste and intelligence. If she gives us the bridges and the river light, she also gives us a rainy morning at a public hospital. Avenue Montaigne is sweet, but it’s not candy-coated. It notes the effect big money has had on Paris, and how that loot has corroded our dream of a place where everyone can find his or her niche, and where natural aristocrats can rise. Thompson notes this obscene wealth in a glance: a shop window that advertises a pair of gloves selling for 550 Euros, while he suggests the reality of a city–like New Orleans or San Francisco–that sells what it used to give away.

‘Avenue Montaigne’ opens March 16 at the Smith Rafael Film Center and on March 22 at the Rialto Cinemas Lakeside.