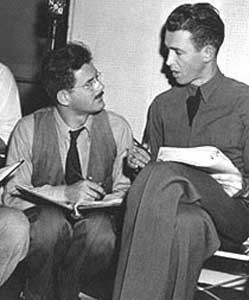 We Hold These Truths: Radio producer Norman Corwin worked with Jimmy Stewart, among other stars of the era, in creating indelible audio reportage.

Weight of the World

Oscar-nominated docs give snapshot of the year

Genocide. Suicide. Patriotism. These are the types of weighty and emotional landscapes traveled in the course of an epic. But perhaps the same territory can be covered in a much shorter time. This year’s Oscar-nominated short documentaries, screening at the Rialto in Santa Rosa beginning March 3, attempt to do just that.

While Kevin Carter’s 1994 Pulitzer Prize-winning photo of a collapsed and starving Sudanese child being stalked by a vulture is well known, the man behind the image is not. The subject of The Death of Kevin Carter: Casualty of the Bang Bang Club was a brilliant photographer with a troubled mind, constantly overridden with guilt about his lack of involvement in the horror that he photographed. This brief documentary attempts to shed light on Carter’s ideals, as well as comment on his suicide (which occurred shortly after he received the Pulitzer).

The ethical questions around photographing a starving child instead of saving it are many, and the resulting public outcry (Carter was referred to by some as “the real vulture”) no doubt contributed to his suicide. But unfortunately, when the topic is breached in Dan Krauss’ film, it is only discussed by friends and colleagues of the photojournalist, people who predictably clamor to his defense and lambaste a public who dared question his actions. The result is a weak film that suffers from too much subjectivity and sugarcoating.

Another entry, The Mushroom Club, by three-time Oscar-nominated filmmaker Steven Okazaki, examines the current lives of 10 Hiroshima survivors. It is strange that someone as experienced and celebrated as Okazaki chose a topic that simply cannot be covered in this limited time frame. With 35 minutes of film and 10 subjects, these individuals are relegated to little more than a sound bite of sorrow per person. Each gets a scant few minutes to tell his or her story, shed a tear in front of the camera and then look off into the distance as Okazaki fades out poignantly to introduce a new survivor.

Also concerned with aftermath, God Sleeps in Rwanda examines the aftereffects of the 1994 genocide in Rwanda. Filmmakers Kimberlee Acquaro and Stacy Sherman attempt to show how the violence, which left Rwanda with a 70 percent female population, forever changed the roles of women in that African nation. The brief vignettes of various Rwandan women–among them a police officer, elected politician and bedridden woman dying of AIDS–are a good, direct way to get the message across. But the piece floats along without much gravity, not showing its true directive until almost halfway through its brief running time.

Refreshingly more straightforward is Eric Simonson’s A Note of Triumph: The Golden Age of Norman Corwin. This gem of a film aims to enlighten the world about the work of one of the greatest players in radio’s golden age. As Simonson shows, Corwin was a creative force of nature. His best known series, 26 by Corwin, had the writer, director and producer crafting an all-new, all-original half-hour radio play on a weekly basis. Triumph puts particular emphasis on Corwin’s best-known broadcast, “On a Note of Triumph,” which aired the evening of V-E Day, 1945.

This film works best because it astutely focuses its lens on a single subject rather than a large-scale issue. All these films elicit emotion from the viewer, but Triumph may be the film compelling enough to make viewers eager to learn more about its subject.

But perhaps gauging which film prompts further study misses the point. As Hiroshima survivor and cartoonist Keiji Nakazama says in The Mushroom Club, “Human beings forget unpleasant things.” But with the help of these potent Oscar-nominated works, we will find it that much harder to let the pain of the world slip our minds.