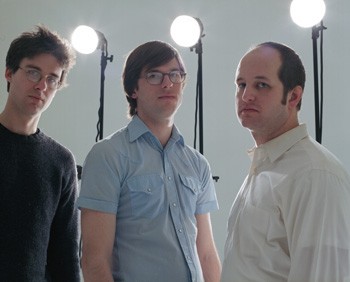 For the release of their seventh album, The Wedding (Jagjaguwar), Oneida sent out a joke press release stating they had built “the largest music box on the East Coast,” describing it as a “hand-cranked behemoth” containing over 70 saws. The slight problem was that a number of hack journalists–including yours truly–actually took the bait. Duh.

“We didn’t know that people would take us seriously,” says Oneida’s Kid Millions in an e-mail exchange, “but Oneida’s music box exists only in our fancy. It’s a good metaphor for the process involved in making this record, but we’re just people who write music and distill it into something else.”

Even so, the minor hoax proved that folks like me are more than happy to believe Oneida capable of just about anything. This band has released an armload of material and grown musically from a mildly arty psychedelic throwback party band to an organ-driven growling beast of unexpected power and beauty. The band formed in 1997, playing alternative venues around Brooklyn, and established themselves in what has since been both dubbed and exploited as the “Brooklyn scene.” Over time, they’ve slimmed down in personnel to three members: keyboardist Bobby Matador, bassist and guitarist Baby Jane, and drummer Kid Millions.

Oneida often employ thrashing drums and hyperactive organ-pounding, but at times they’ll draw these elements out to nearly excruciating lengths, repeating themes like a skipping record so that when the music pulses with even the most subtle shift, it feels like the heaviest thing in the world. This was especially the case on their 2002 double album Each One Teach One, which featured the 30-minute track “Sheets of Easter,” a song that channels intuitive listeners to a higher state of being through repetition. Even so, it’s hard to listen to more than once a year.

I first found out about Oneida when I saw them open up for space rockers Kinski a few years ago. They became the elusive Unexpected Opening Band That Changed My Life. Their performance–a bawdy, focused explosion of pure musical energy, somewhat like a shimmering epileptic bulldozer–threw me for such a loop that I had to process it a night or two before I knew I had to go out and buy all of this band’s albums right away.

“Spazz rock,” Mr. Bir Toujour called it, a fairly apt term for their live incarnation. Kid Millions is a hurricane of a drummer, combining brutal athleticism with technical savvy. Add Bobby hammering away on his organ and Jane weaving layers of feedback over everything, and you get music so overwhelming it’s ecstatic.

Even so, their albums have been uneven, with deep pockets of greatness amid occasional flotsam. The moody Secret Wars released last year was more cohesive, but The Wedding finally delivers a fully realized work. The most listenable of Oneida’s albums, it still sounds wonderfully Oneida-like, at turns delicate, lurching, menacing and just the tiniest bit campy. And it has strings.

“Songs for The Wedding have been brewing since 2001,” writes Kid Millions. “Bobby and I were listening to the Left Banke on a car ride in 2000, and we thought, ‘Hey! Let’s do a record like this!’ Sounded good to us. We used them as a jumping-off point.”

There’s a substantial gulf of radio friendliness between the achingly lovely baroque-pop of Left Banke’s 1966 hit “Walk Away Renee” and the majority of Oneida’s previous work. Though still not radio-friendly, The Wedding offers spooky, complex arrangements (“Run through My Hair”), epic psychedelic balladry (“Spirits”) and fragile, sparse asides (“Charlemagne”).

Oneida writes songs as a three-headed unit, which could account for the cornucopia of genres that come through in their music. They throw stoner rock, late ’60s garage-punk and Germanic ambient noisemaking into their gurgling pot of tricks. Outside observers might take in their substantial stack of releases and think they’re always conjuring up something new, but that’s not how Kid Millions sees it. “I have to say, I think we could write more songs,” he writes. “People think we release a lot of music. I think other bands probably only have one principal songwriter or don’t really commit to the process like we do.

“We don’t turn down ideas,” he continues. “There are always new demos and recordings getting introduced into the mix. When a project reveals itself to us, we start to whittle stuff down. Bobby started writing songs with very complicated chords and structure that he can’t play anymore. None of those songs made the record except for ‘Charlemagne,’ the simplest of them all, and maybe the most penetrating.”

“Charlemagne” is one of the six tracks with string arrangements by the Fireworks Ensemble’s Brian Coughlin. The strings push Oneida into a quieter, lusher place, one they’re surprisingly good at inhabiting. One of the few bands better at forging new sounds than parroting their influences, Oneida always sound like Oneida no matter what. Which is why I’ll take them for better or worse any day–with or without a music box.