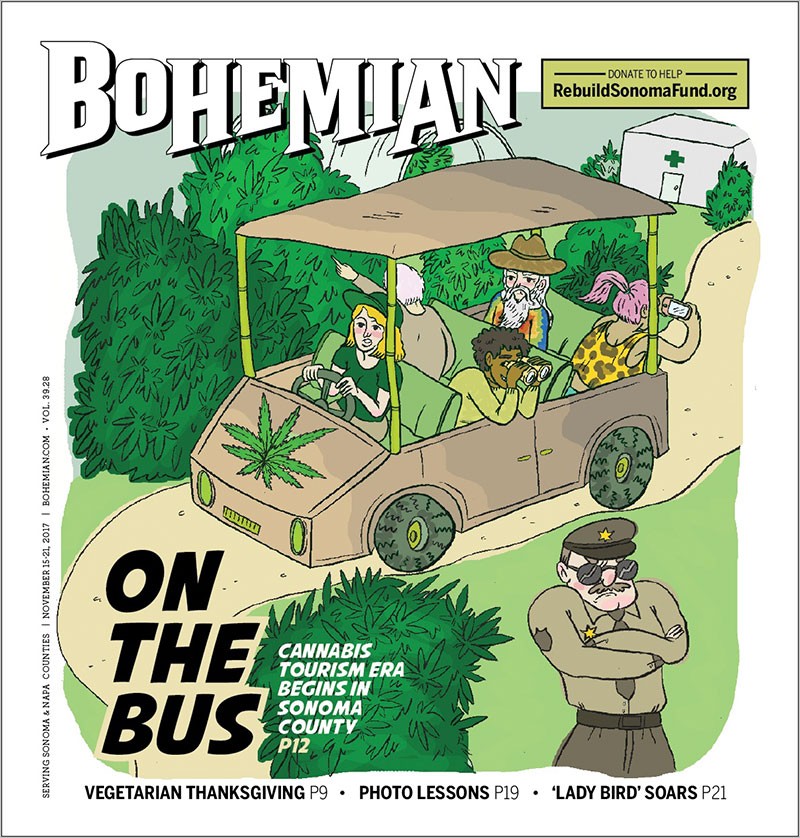 We were packed and ready to board when a couple hustled over to our idling Mercedes Sprinter cargo van at a Rohnert Park park-and-ride lot. “Is this the van for the beer tour?” asked the man.

Our tour guide, Brian Applegarth, chuckled a bit and greeted the eager beer drinkers. “This is a cannabis tour,” he said. “It’s the first of its kind in the North Bay.”

Applegarth, co-founder of Emerald Country Tours, California’s first cannabis tour company, explained what the tour was about and where we were going, and by the end of their conversation, the couple wished they could get on our bus and skip the beer tour. But this was a test run for media and the tour wasn’t open to the public yet. That happens next year. The couple said they would be back.

The exchange was a bit of a vindication for Applegarth, who has been working with partner Jeromy Zajonc to get the tour company off the ground for the past few years. With recreational cannabis becoming legal Jan. 1, and growing mainstream interest in cannabis culture and products, Applegarth is poised to capitalize on Sonoma County’s unique location in the middle of what he calls “Emerald Country”—a region from Santa Cruz to Arcata that’s home to decades of cannabis cultivation, culture and history. The Emerald Triangle (Mendocino, Humboldt and Trinity counties) is the heart of California’s marijuana cultivation, but the larger region outlined by Applegarth has great stories and characters, and Applegarth wants to guide pot tourists there just as they now flock to the North Bay for winetasting and beer tours.

“Our goal is to empower people with information, promote a sense of wonder and let them feel transported.”

Applegarth is not creating a booze cruise for stoners. There is no smoking or vaping on the bus. Cannabis consumption is not allowed for legal reasons (but participants can partake off the bus where permitted), but Applegarth also wants the tours to focus on cannabis culture, heritage and health and wellness, not clouds of smoke. He’s also working on a self-guided tour with key stops along cannabis’ road to legalization, with a focus on the people who fought for the plant’s acceptance as a health benefit for those with chronic illness.

“The history is deep,” he says.

Applegarth has traveled extensively internationally and gone on many sightseeing tours himself, and he likens his tours to Vietnam’s Cú Chi Viet Cong tunnel tours, a window into a formerly secret world.

Our first stop was Rohnert Park’s not-so-secret OrganiCann, a dispensary that bills itself as the first and biggest outlet in Sonoma County. Guerneville’s Riverside Wellness might dispute that claim to being first, but OrganiCann is certainly the biggest. The 30,000-square-foot warehouse retail space is the largest in California. Anyone with a medical recommendation can visit the dispensary (and after Jan. 1 that won’t be necessary).

So what is there on the tour that’s not available to the public? Access. While the nature of the tour will likely evolve once it’s open to the public, our stop at OrganiCann featured a behind-the-scenes tour of the business operations and plant nursery. It would be an eye-opener to anyone who has never entered a dispensary before—more than a hundred kinds of edibles—but probably not particularly illuminating to those who have. Applegarth says his tours are aimed at anyone with interest in the history, culture and medical benefits of cannabis.

“It’s an exciting time because we get to invent what cannabis tourism looks like,” he says.

Will people spend the $179 for a tour? It remains to be seen. Applegarth says interest is high.

“We’re excited to see where it goes,” he says. “We’re going to follow the direction of the consumer.”

For newcomers and old hands alike, visits to cannabis farms will probably be the most interesting part of Emerald Country’s tours, since these are the places that were hidden and off-limits until we entered the new legal era. And to be sure, many operations still want to remain hidden. Applegarth says he reaches out to growers looking to build brands and stake a position in the new legal marketplace. He’s in contact with about a dozen growers for the tours.

On the way to visit a grower in Forestville, Applegarth unfurled a poster of “cannabis man,” a medical chart that described how the human endocannabinoid system works and how cannabis affects the body. It was a short tutorial, just a hint of some of the health and wellness information he will be imparting on the tours, one of which is focused just on that subject.

For a bit of fun, Applegarth invited us to don blindfolds as we neared the grow site to recreate the experience of “trimmigrants” being shuttled to clandestine gardens to trim and process freshly harvested pot. Back in the day, some growers hid the location of their grows, lest some trimmers come back and rip them off.

Turning off Highway 116 near the Blue Rock Quarry, we bumped up a dirt road and immediately passed a Sonoma County sheriff’s deputy handcuffing a Latino man. Was this a pot bust, we all wondered? It turns out the man was an undocumented worker arrested on an immigration charge and headed to the clutches of Immigration Customs Enforcement. But as we drove up the road, we were reminded that even growers who comply with state and local authorities can still face arrest and destruction of their crops.

The grower we met was “Oaky” Joe Munson. He grows cannabis for AIDS patients free of charge. He’s been raided by the sheriff and had his plants confiscated several times (see the Nugget, p30). He said he showed deputies his permits to grow medical marijuana, but that hasn’t stopped the raids.

“They said, ‘No, marijuana is bullshit.'”

Even though he says he’s in compliance, he fears another raid.

“I put the biggest plants at the bottom of the hill so the cops have to work really hard to get them out.”

He asked us not name him or publish any photographs before he harvested his crops, which he has since done.

From Munson’s farm, we headed to Guerneville for a catered lunch on the Russian River and a visit to the shoebox-size Riverside Wellness, a densely stocked dispensary that caters to the Russian River community. It was a pretty idyllic end to the sneak-peek tour.

Will cannabis tourists come running next year? My guess is yes, especially as Applegarth and Zajonc add more growers to the itinerary. Everyone wants to meet former outlaws and their old hideouts.

As the North Bay tourism industry seeks to attract visitors after the fires, pot tours may be an attractive option. Applegarth sits on Sonoma County Tourism’s marketing committee, but so far the organization is not promoting the tours alongside the many excursions it does support in Sonoma County. That’s not a slight against the tour company, but simply a reflection of the fact the tours aren’t open to the public yet, says Tim Zahner, Sonoma County Tourism’s interim CEO. There may be opportunities for collaboration next year, he says.

“After January we’re going to start figuring all this stuff out and have a lot of good questions,” says Zahner.

Next ArticleNov. 18: Light Up the Town in Sonoma