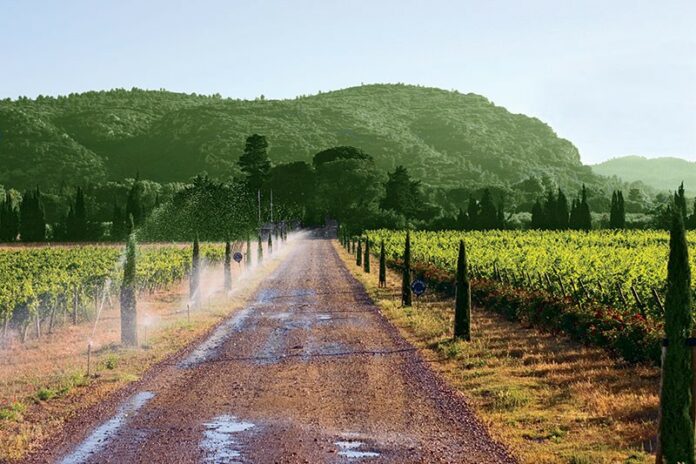 Of Water and Wine

But as the grape crop ripens, the North Bay faces a state push to monitor and manage agriculture’s groundwater pumps, which winegrowers see as unnecessary.

Gov. Jerry Brown’s all-fronts fight against the drought already ranges froma $500 fine for failing to use a hose nozzle to a proposed $25 billion twin delta-tunnel project. Now the state will burrow into local water agencies’ business under bills from Assemblyman Roger Dickinson and Sen. Fran Pavley.

Under their proposals, localities would develop water-basin sustainability plans with the assistance of, and approval from, the state. Pump stations would be state-monitored and subject to takeover for water-use violations.

The Association of California Water Agencies, which represents the interests of state water agencies, supports the bill, with amendments under negotiation that would clarify what happens when a local water district is unable to manage its water supply.

The wine industry is leery of the bills. “Both have different language that is more burdensome to ag in general, that we are very cautious about,” says Garrett Buckland, vice president of the Napa Valley Grapegrowers, an organization of Napa County viniculturalists and wine-related businesses.

“We have good [water] resources,” he says. “We have a great monitoring system, and we have a wonderful county system that emphasizes sustainable water use. We feel that local control of these resources is better than statewide control.”

But Nancy Vogel, a spokeswoman for the California Department of Water Resources, says greater oversight is warranted. “We need better technical information,” she says, “and we need the authority to restrict pumping. That doesn’t exist in the law.”

She insists the state will defer to locals. “The state can step in, but the authority is well-defined—and we also count first on the locals to manage the resource, because they know best their basins.”

Buckland is sympathetic to the plight of fellow farmers in the Central Valley but says it’s not fair to lump the North Bay with more water intensive farms elsewhere in the state.

“One size does not fit all,” says Buckland. “We do not receive state water for ag irrigation in general. We get no water from the [Sacramento River] Delta or the North Bay Aqueduct—just water that falls within the county or surface water that’s fallen in the county.”

The soil holds water in the North Bay “like a reservoir,” says Buckland. “Someone who is planting annuals, they can’t fall back on that. If they don’t have water coming to them, they might just be out of luck.”

The grape is second only to cacti in self-regulation, he says. “The same vineyard ground could double [the water] or half the water and still have a crop,” says Buckland.

If only the state were so efficient.

To meet a 6.6-million-acre-feet rainwater shortage, the state spent $447 million this year to pump
5.5 million acre-feet of groundwater.

“Agriculture as a whole got hit hard,” says Vogel, who adds that the state sent some water contractors only 5 percent of their typical allocation. “That’s why they are leaning on groundwater so hard,” Vogel says.

The drought has cost the state $2.2 billion, and will cost another $2 billion over the next two years, according to a July 15 UC Davis report. Most of the pain was felt outside the North Bay. Coastal farms and Southern California fared well compared to the Central Valley, with 19,000 acres left fallow for lack of water. Those areas saw $10 million in lost revenue and $6.3 million in additional pumping costs; the state as a whole spent $447 million on groundwater pumping.

As the costs mounted, Brown asked Californians to voluntarily reduce usage by 20 percent. Instead it went up 1 percent.

Now Lady Gaga has taken up the call to conserve with state PSAs, and there are new fines for residential water wasters.