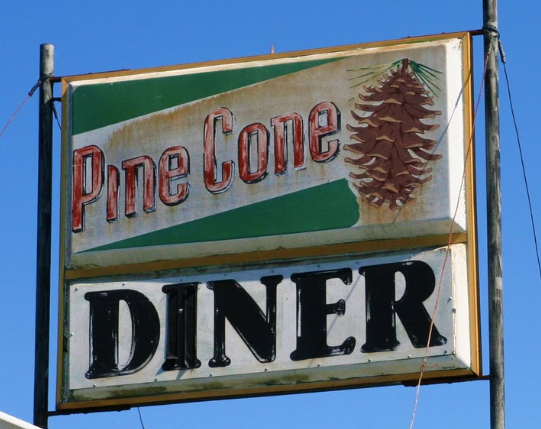 Ode to a Patty Melt

We were on the road from Santa Rosa to Bolinas on Wednesday in the luxe and powerful Grand Marquis, rolling large and in charge, with morning business concluded: Check in with the Santa Rosa office, whack out some online business, get ready for next week’s issue.

My companion had previously dumped his car at the wrecker’s in Santa Rosa with the tow guy, and needed to grab a check for his car; now he had money burning a hole in his pocket, even after blowing $72 at the Santa Rosa Barnes & Noble and some tea at the nearby Peet’s on the main downtown drag.

We purred through Petaluma, stopped at the McEvoy Ranch for some olive oil and information—and then debated and discussed in great and animated detail, the various Pt. Reyes Station lunch options down the road—Station House Café, Osteria Stellina, Pine Cone Diner.

The piscatarian in the car emphasizes that he doesn’t eat meat, though I did recall selling him a large, barbecued and quite deliciously nasty Polish sausage at a recent Bolinas Community Center Fund-Raiser…hmm. Well.

We all have our little slips now and again.

I was about to have one of my own. I turned 47 about a month ago and decided to lay off the red meat awhile.

Maybe a long while.

Maybe until lunch Wednesday, after we rolled into Pt. Reyes Station with hunger and mirth on the mind—and the Pine Cone in our sights.

The Pine Cone Diner falls into the category of institution. You can know this even if you’ve never been there before. As diners go, it is not especially cheap, but as Marin County eateries go, it’s very affordable.

It’s a diner, and diners are by, for and of the people. I come from Long Island. We know diners, and we know when someone’s trying to jack you with some $23 offering of grandma’s meatloaf.

If journalism, at its best, is about afflicting the comforted and comforting the afflicted, let’s afflict the comfort food wannabes that ape diner food and try to convince you that macaroni and cheese is haute cuisine because you rubbed your truffles on it. The Pine Cone Diner is not one such place. Its comfort is built in, unaffected, even a little cranky at times. That’s cool.

Goshamighty, all this talk of food reminds me that I had the craving. I had the mind-eyeball for a cheeseburger, a fat, juicy burger. With a dollop of mayonnaise squeezed on the side of the plate, for extra-dipping pleasure. With French fries, glorious French fries bathed in the oil of excess.

But I thought of the pact: lay off this stuff, man.

So I scanned the menu, and scanned it again. I ignored the cheeseburgers with great effort, I scoffed at the turkey burger, I shot poison darts at the garden burger. One or two items sounded like Alice Waters was hiding under the placemat, and I ignored those, too.

And then I spotted it. Patty melt!

Hey, I thought, that’s a big step-down from the big and juicy burger. It’s verily a compromise. Why, it’s practically like ordering cottage cheese on a fantail of iceberg lettuce and some treacle-fruit from the can, right?

The Patty melt, to put the finest of points on it, was an exquisitely humble take on the old standby: butter-grilled rye, sautéed onions, melted cheese of indeterminate origins, and that godforsaken patty of love-hate-love, cooked to perfection. It’s Marin Sun Farms meat—comes from right down the road. It’s good for you.

In retrospect, I should have ordered the double patty melt.