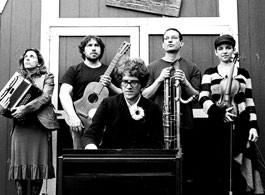 Tin Hat’s members have offered their magic to dozens of projects and occasionally invited collaborations from big-name musicians on their own, such as Tom Waits’ sultry and haunting “Helium Reprise” from 2000’s Helium and Willie Nelson’s swooning “Willow Weep for Me” on 2002’s Rodeo Eroded. Branching out, Kihlstedt has recently created a wild performance piece influenced by Jorge Luis Borges’ Book of Imaginary Beings and collaborated with husband Matthias Bossi to weave field recordings from Europe with percussion and string instruments. Orton has composed for film and radio, most notably on the 2005 film Everything Is Illuminated, and Goldberg continues to lead his own quintet while working on a project dedicated to the music of late jazz musician Steve Lacy.

Tin Hat’s latest album, the live Foreign Legion, which includes Ara Anderson on trumpet, piano and organ and Bossi on percussion, is a testament to the flawless manner in which the group continues to perform. A compilation of performances from Berkeley, Calif., and Mallorca, Spain, Foreign Legion offers a more raw, authentic and varietal sound on old favorites like Book of Silk‘s “Hotel Aurora” and Memory Is an Elephant‘s “Foreign Legion.”