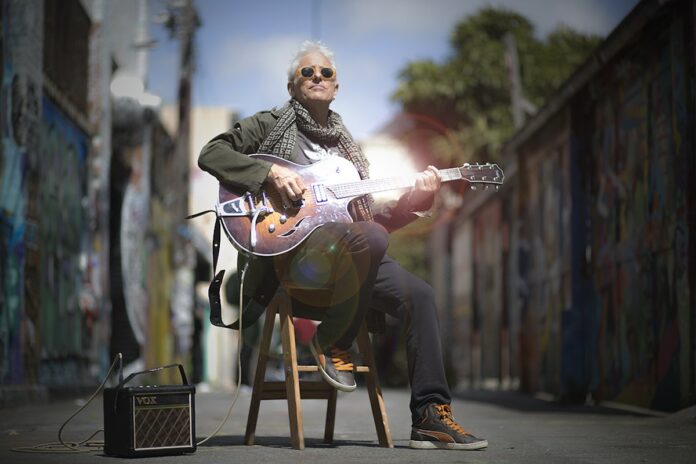 Based in West Marin, world music artist Jai Uttal is renowned worldwide for his mixture of instrumental and spiritual offerings.

Uttal is best known musically for his heartfelt renditions and upbeat adaptations of classic Kirtans, the Indian call-and-response practice of chanting ancient Sanskrit mantras, accompanied by music. He has also released more than 20 albums that blend elements of reggae, jazz, Indian, samba and rock ’n’ roll; most recently unveiling his ambient instrumental album, Gauri’s Lullaby, in May 2020.

Now, Uttal is releasing a new single, “Behind the Walls,” that addresses the ongoing Covid-19 outbreak at San Quentin State Prison, where Uttal has worked with inmates as part of an interfaith program. “Behind the Walls” is available to listen to online now, and Uttal encourages listeners to donate to inmate advocacy group Re:Store Justice.

For more than 40 years, Uttal has brought his music and interfaith spiritual messages to prisons throughout the country, first touring penitentiaries in the early 1970s with his friend, noted spiritual leader Ram Dass.

In 2011, Uttal began performing at San Quentin as part of the interfaith program, ‘Chaplain of the Heart,’ that features a small group of musicians leading semi-regular Kirtan programs in the San Quentin Chapel. Uttal bonded with many incarcerated individuals at San Quentin, and he—like many Marin residents—is disturbed by the ongoing health crisis currently taking place inside the prison.

According to the California Department of Corrections and Rehabilitation, more than 2,000 incarcerated people in San Quentin have tested positive for the coronavirus since June, more than two-thirds of the incarcerated population at the prison. Reports indicate the outbreak at the prison began in late May when infected inmates from the California Institution for Men at Chino were transferred to San Quentin and improperly introduced to the population there.

In “Behind the Walls,” Uttal bemoans the lack of public awareness and action to resolve the prison’s ordeal, which he calls the “San Quentin Blues.” Comprised of an acoustic guitar and Uttal’s voice laid over strings and a trumpet solo, the song is a somber call for help, and proceeds and donations from the single are going to nonprofit Re:Store Justice, which aims to reform the prison system by working with incarcerated individuals as well as recently released persons.

Listen to “Behind the Walls” now and read Uttal’s extensive artist’s statement about the song below.

“I first started singing in Federal penitentiaries around 1973, when I was touring with Ram Dass. We would go into the prisons and I would sing and share a Kirtan as part of his presentation to the inmates. I found those experiences intense and profound. But it wasn’t until decades later that I began to go semi-regularly into San Quentin prison to sing for the inmates and share with them the practice of Kirtan, as part of an interfaith program that had been in place for some time.

Standing outside of San Quentin can be quite intimidating, with its many huge gates and high walls, but, once inside, in the sanctuary of their small chapel, with a room full of enthusiastic men, that trepidation completely disappears. Of course, it took me a while to find my way to be authentic and real with the men; to not see them as ‘other.’ But once that happened, I found a community of brothers there who were so incredibly committed to their spiritual practices and to finding inner freedom within the confines of their incarceration. Their dedication and deep spiritual longing was completely inspiring to me.

So, I went again and again with a small group of musicians and, after a while, I saw that these men, who at first seemed so hard, we’re melting and smiling and singing and expressing so much emotion. In fact, many of the men got off of their seats and danced like wild Bengali Bauls. After one of the kirtans, a man came up to me and said, ‘This is the REAL San Quentin! This is what you have to tell everyone. Nobody believes this. THIS is the REAL San Quentin. We are all brothers here.’ With tears in his eyes, he referred to the prison as ‘The House of Healing.’

So, when I heard about the intense Covid surge inside the prison and how little the authorities we’re doing about it, I was affected very deeply, and personally concerned with the plight of some of my friends there. It’s amazing to me that what’s happening behind those walls is going unnoticed by most of the residents of Northern California. In fact, the devastation that’s occurring because of the virus in so many federal penitentiaries has just been a footnote in the national news. San Quentin was pretty much infection-free until an incomprehensible decision by the prison board transported a bus load of men from a prison in Chino, California, to San Quentin, in Marin County, California. Many of the transportees carried the virus, some already showing severe symptoms. With almost no medical facilities or possibilities for quarantine, the virus spread like a wildfire and began to decimate the San Quentin population. This is still happening.

So I decided to write and record this song, ‘Behind The Walls,’ and release it as soon as possible so people could know what’s happening in their backyard. (San Quentin is about a ten-minute drive from our home!). Thank you so much for listening to my song and reading my words. Much love, Jai”