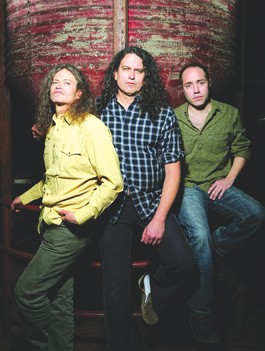 But the arc of their career and music reveals the Meat Puppets, who play Sept. 20 at the Hopmonk Tavern, as much more mainstream. After releasing the acclaimed and influential classics Meat Puppets II and Up on the Sun on the storied indie label SST in 1984 and 1985, the Puppets cruised until catching the early ’90s post-Nirvana wave of indie bands signing to major labels, scoring their biggest hit, the 1994 album Too High to Die and its burly dude-rock single “Backwater.”

Acclaim soared for the band when Kurt Cobain picked three songs from Meat Puppets II to perform on Nirvana’s MTV Unplugged in New York, but the Puppets dissolved soon thereafter. In predictable rock tradition, guitarist Curt Kirkwood attempted to reform the group with new members, and later pursued inconsequential side projects. His brother, bassist Cris Kirkwood, also followed a predictable rock-star path, trudging his way through drug tragedies and scuffles with the law. But the Kirkwood brothers have endured, albeit with clichéd touches; in true Spinal Tap fashion, their current reunion tour even features a new drummer.

For a 30-year-old rock band, this story is pretty normal. Likewise, beneath the surface, the Meat Puppets’ quirky music is deceptively straightforward. Their art has never been excessively hardcore or abjectly Dadaist, but has instead carried a more familiar, gentle Magical Mystery Tour pop-rock charm, and those charms abound on their new 2009 disc Sewn Together, their second reunion disc following 2007’s scrappier Rise to Your Knees.

There’s still a chugging rock crunch on cuts like “Blanket of Weeds” and “S.K.A.,” with tracks often running out in warmly layered, mildly psychedelic drones. The sharp banjo riff that propels the train-track rhythm of “I’m Not You” is unusual but clear. The silly whistling ditty “The Monkey and the Snake” moves effortlessly from the sublime to the ridiculous in a mere two verses, noting first the profundity that “it takes a while to never understand” and then goofing that “now the monkey’s singing in a band.”

Better yet, the Puppets’ signature twists on folk-rock and country-rock lead to sweet, mature moments of indelible pop songwriting. Sincerely thoughtful reflections rise above any dabbling in absurdity on the sober piano ballad “Smoke,” as the band bemusedly states that “the good times are for hire / But not by anyone . . . I know there’s stars in the sky / But smoke has made it hard to see tonight.” The title track is lilting, melodic, chiming folk-rock worthy of Buffalo Springfield or the Byrds, while the simple, shuffling sing-along love song “Love Mountain” sounds like a shoulda-been Steve Miller hit.

Are the Meat Puppets really earnest hit-makers who’ve been hiding their mainstream talents all these years? “Love Mountain” would have been a hit for any artist in the pre-punk, pre-hip-hop ’70s era of Top 40 radio, and yet the Meat Puppets are products of the ’80s underground era, when cutting-edge rock bands didn’t want to be part of the mainstream.

The name “Meat Puppets” itself may have been the best act of rebellion the Arizona punks could muster, their one flagrant smokescreen sent to convince the underground that they were hardcore freaks. But after three decades of cool, childlike folk-rock, the smokescreen is gone, finally revealing instead a band with a pure and pleasing pop heart.