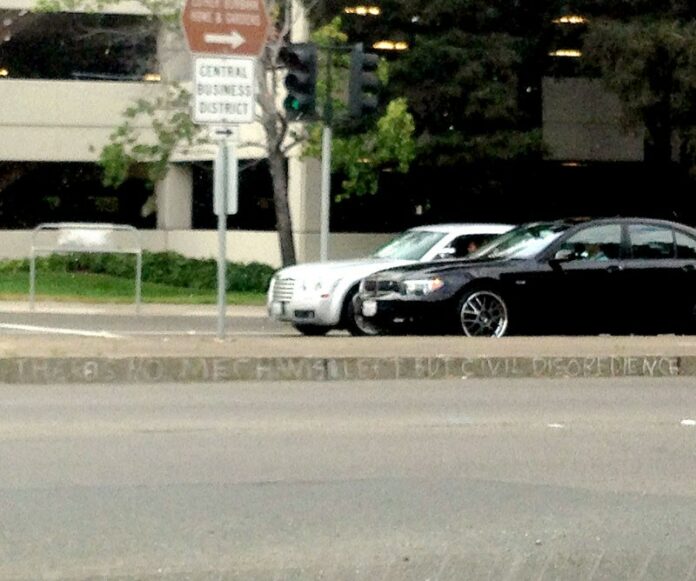 “There is no mechanism left but civil disobedience.” The chalk message remains on the curb at the site of Santa Rosa’s most raucous protest in the Andy Lopez saga. The quote by author and activist Chris Hedges may be all too true.

On Monday, the NAACP of Sonoma County sent a letter to the association’s national president, Esther Haywood, to thank her for her efforts surrounding the Ferguson situation. Ann Gray Byrd, president of the Sonoma County chapter, mentions the similar situation in Santa Rosa with Andy Lopez. “At the very least, you have gained the attention of the U.S. Justice Department—we have not.”

The situation in Ferguson become national news when police aggressively tried to quell a protest—a peaceful demonstration, at the time—taking place in the streets of the town, whose population is 70 percent African American. A week of tear gas, rubber bullets, looting, tanks on the street, dozens of arrests and violent threats against journalists prompted the state troopers, then the National Guard to step in.

The similarities of the situations are hard to ignore: unarmed minority teenager shot multiple times from far range by a veteran officer who was just doing his job. The outcomes are vastly different: in Santa Rosa, children walked out of school to participate in demonstrations; one protest closed part of the freeway for an hour; and a few protestors were arrested over the course of a month.

The shooting of Andy Lopez made national news, but did not spark a federal investigation. Yes, the Ferguson situation has gained the attention of the Justice Department, but considering how it happened, is that really what we want in Santa Rosa?

The deputy behind the gun that killed Lopez, Erick Gelhaus, has been exonerated of criminal charges and returned to patrol last week, 10 months after killing a toy gun-wielding 13-year-old.

America has become the neglected child that acts up for attention. But instead of listening and acting upon the screams for justice, our guardians just tell us to shut up, slap us on the back of the head, and remind us that “There’s plenty more where that came from.”

Perhaps all we have left is civil disobedience, but the word to emphasize is civil. Only beating hearts with loud voices can achieve the results that reckless action desires.