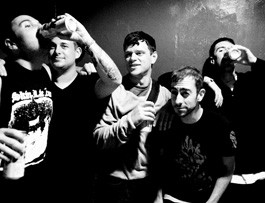 For the North Bay hardcore band All Teeth, who release their Young Love EP this weekend at a blowout show in Santa Rosa, such luxuries as rehearsing weekly are geographically infeasible—two members live in Ukiah, one lives in Reno, one lives in the East Bay and Michael Bingham, guitarist, lives in Santa Rosa. Basically, All Teeth only practice before they go on tour. Which is as often as humanly possible.

The last time I ran into Bingham, he was getting off work at Gaia’s Garden, a vegetarian restaurant in Santa Rosa, getting ready to hop in a biodiesel van and drive three days straight, without stopping, to Boston. The primary reason for the East Coast tour was Florida’s version of SXSW, simply called “Fest” by the thousands who flock to Gainesville every year. “We played this weird generator show behind a warehouse at two in the morning,” says Bingham. “There were 400 people there. It was maybe the coolest show I’ve ever played in my life.”

That’s saying something, since All Teeth have been on three full U.S. tours and countless regional tours in support of their 2009 debut full-length I Am Losing. Knowing that hitting the road is the way to make it as a band, “We’re gonna tour all year,” promises Bingham. This weekend’s record-release show will be the first chance fans have to pick up Young Love, a record pushing a matured sound for All Teeth while pulling no punches. Leadoff track “Goodbye Faye Dolan,” a reference to Liv Tyler’s character from That Thing You Do, leads into the kick-in-the-gut “Caller I.D.,” one of the most blistering songs about a phone ever written.

Headlining the show is Ceremony, whose 2009 record Rohnert Park put that Sonoma County suburb on the hardcore map, and who Bingham says “made it foreseeable for North Bay bands to take things to a crazy level, as far as hardcore goes.” Sabertooth Zombie, Dead to Me, Strike to Survive and Hear the Sirens round out the bill, making it a must-see showcase for the state of hardcore in the North Bay today. Catch the madness on Friday, Jan. 7, at the Arlene Francis Theatre. 99 Sixth St., Santa Rosa. 6pm. $8-$10. 707.528.3009.