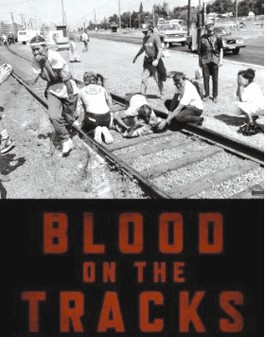 S. Brian Willson’s autobiography Blood on the Tracks contains harrowing descriptions of his time in the Vietnam War—experiences that catapulted Willson into the life of a nonviolent peace protestor and pacifist. His story entered the national consciousness when both of his legs were severed by a U.S. government munitions train during a nonviolent blocking action. “I have continued to be active in educating about the continued destructive arrogant attitudes and policies of the ‘American’ civilization,” says Willson in the book, “while promoting a radical paradigm alternative.” S. Brian Willson speaks on Thursday, July 14, at the Community Church of Sebastopol. 1000 Gravenstein Hwy., Sebastopol. 7pm. Free. 707.575.8902.

After months of what Pizza Orgasmica owner Taylor Maia describes as “ongoing relentless persecution” from color-offended neighbors, the Marin Planning Commission has decreed that the Brazilian-born proprietor must tone down the bright yellow shades of his San Rafael pizza joint. While countries like Paris and Mexico flaunt and celebrate vividly painted buildings, adventurous design aesthetics evidently don’t cut it in San Rafael, where the paint—and the restaurant’s name—has been called “racy.” A resigned Maia was quoted as saying that he would not appeal the Planning Commission’s mandate of a lighter, flatter shade, and that Pizza Orgasmica could be painted “any color the city wants . . . it does not matter to us.” Thus ends months of conflict, with the prospect of yet another shade of beige in downtown San Rafael.