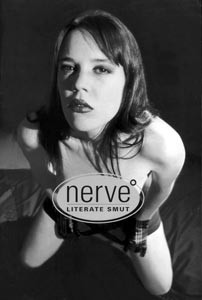 CYBERSPACE is a cold and soulless place. Or at least it can be. Perhaps that’s why a recent study found that folks who surf the Internet on a regular basis are more depressed than their Web-less peers. What the study didn’t figure out is whether those depressed Net denizens were depressed before they got there, and if their depression was simply compounded by hanging out with a lot of other depressed Web surfers.

And then there’s always the possibility that those depressed souls are feeling low because they weren’t getting laid and were attracted to the Net in the first place by the promise of the cheap thrills found in the hard-core sex sites that are proliferating like, well, rabbits.

It’s a good example of the Internet’s alternative strength, and makes a good case for preserving free speech on the Net.

Nerve: Literate Smut (Broadway; $15) is a provocative, if somewhat more flaccid, print version of the celebrated online publication. Edited by Nerve.com co-creators Genevieve Field (who edited books for MTV in her pre-Nerve life), and Rufus Griscom (who deserves a lot of praise for leaving a job at the Wall Street Journal to bring the masses a better brand of smut), this original paperback throbs with stylish soft-core sex and literati.

Unfortunately, the aforementioned superstar writers are few and far between in this print version, which means one must sit through (or choose not to, as the case may be) essays by former sex-trade workers who give a glimpse behind the green door but usually fail to offer insight into what led them there in the first place. Still, essays like “Diary of a Live Nude Girl: Snapshots from the Lusty Lady” by San Francisco writer Cammie Toloui (who worked during 1991-92 at the “live” peep shows at the infamous Lusty Lady) help lend a sense of humanity, not only to the women who work in the sex-trade industry, but also to the mostly male customers who frequent these seedy businesses.

After all, it’s all too easy in this neo-Victorian era to dismiss the needs of folks who seek satisfaction at a strip show, adult video theater, or even the Web–a narrow mindset that ultimately denies the complexities of human sexuality.

As Dr. Elders suggests in her essay “The Dreaded ‘M’ Word”: “Sexuality is part of creation, part of our common inheritance, and it reminds us that we are neither inherently better nor worse than our brothers and sisters.”

That’s a lesson worth learning.