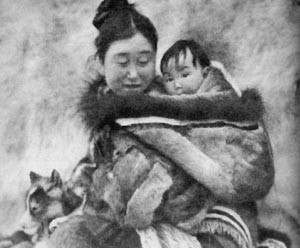 Nanook of the North

‘The Smiling One’: Nyla from the 1922 documentary Nanook of the North.

THE FIVE distinguished panelists, who have beenarguing for over an hour, have now stopped. The enormous audience, loudly vocal throughout the lively noontime discussion (the title: Documentary as Witness: The Great Films of the Twentieth Century), has suddenly grown still and quiet. All eyes are on the podium, as, in turn, the panelists each lean toward their microphone and reveal the title of the one documentary film they regard as the best, the most influential, the greatest of all time. “Um, Nanook of the North,” states Dale Pollack, dean of filmmaking at the North Carolina School of the Arts.

“Nanook of the North,” repeats Oscar-nominated documentarianD. A. Pennebaker.

The remaining two panelists–Mary Lea Bandy, chief curator of film and video at the New York Museum of Modern Art, and David Francis, chief of the motion picture division at the Library of Congress–each name other films (Bandy choosing Night Mail, a 1936 British film about the postal service, and Francis opting for an obscure bitof time-lapse film called The Destruction of the Starr Theater).

They quickly admit, however, that Nanook is something to crow about.

It would do Robert Flaherty proud to hear it. The explorer-turned-filmmaker devoted overtwo years to his silent epic of Eskimo life in the early 1920s. In so doing, Flaherty unleashed a one-of-a-kind work of art, a film crammed with unforgettable images: Nanook the hunter, wrestling a seal up from a hole in the ice; Inuit children playing with bows and arrows as theirfathers build an igloo. Upon itstheatrical release, Nanook captured the world’s imagination; when the film’s protagonist died on a hunting trip in 1924, there was widespread mourning. Flaherty went on to make other memorable films (among them Tabu, Man of Aran, and Louisiana Story), but none that brought him the success he found with Nanook of the North.

“It is safe to say,” says a reverent Stoney, “that Flaherty and Nanook were the beginning of the marvelous art form we now call documentary.”