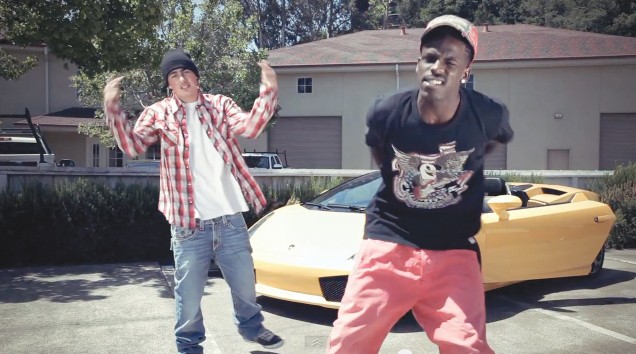 My Lambo Is Hot

When Guy Fieri’s Lamborghini disappeared last year from a San Francisco garage, and when the perpetrator was revealed to be a 19-year-old kid who rappelled from the ceiling at night and drove it away, it was only a matter of time before someone filmed a rap video about the stealth job.

Enter Brilliant & Timbalias, whose “Max Wade” is basically the funniest response to the ordeal. Over a beat and cadence borrowed from Lupe Fiasco’s “Building Minds Faster,” the rappers profess their respect to Wade for pulling off the heist, and manage to invoke the Marin County Jail and the Marin IJ while rhyming next to—you guessed it—a yellow Lamborghini.

The Marin County duo are part of the 707 Bay Area Showdown Rap Battle Contest this week in Petaluma, alongside HD and the Bearfaced Gang, Sean E, Yung Weeybo and Tha Realest House, Elated Havoc, Notrotious, Luke Jones, Big Green and Legacy 9. For only $10, that’s a lot of verses—just hold on to your car keys.