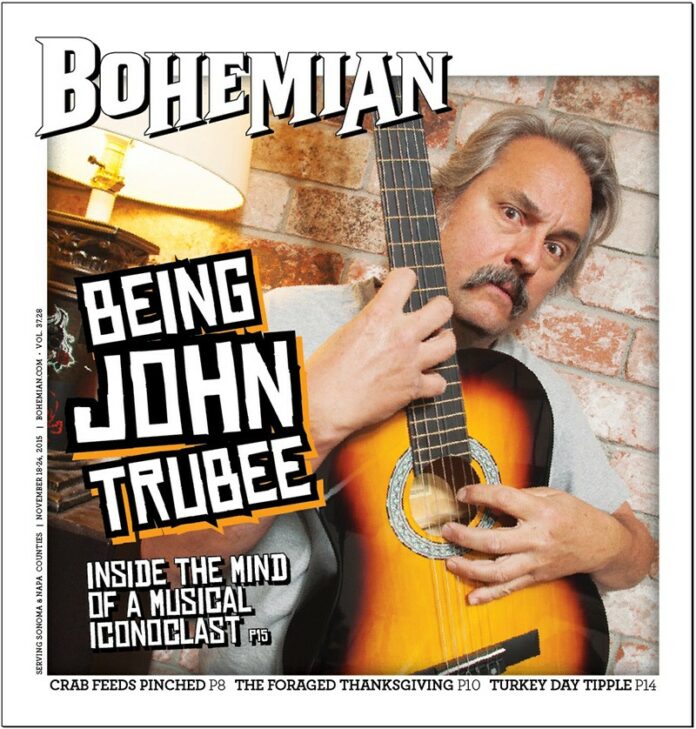 Music on the Margins

Inside the world of John Trubee, Sonoma County's strangest songwriter

I got high last night on LSD

My mind was beautiful,
and I was free

The mischievous musical creations of John Trubee are unlike anything else in the world of pop. Known by few and understood by fewer, the longtime songwriter, bandleader and now record-label owner has called Sonoma County home for more than 20 years, yet his hermetic lifestyle and rejection of all things commercial have kept him out of the spotlight—and he wouldn’t have it any other way.

“My basic impulse is to make and create things; I’m not naturally born to self-promote and be like a politician,” says Trubee from his modest home in Santa Rosa, sitting in front of a wall of 8-tracks, LPs and a non-functioning reel-to-reel machine. “And since I tend to be introverted, it’s hard for me to go out and glad-hand or draw attention to myself.”

If Trubee had become a filmmaker, he might draw a comparison to horror director and American Movie documentary subject Mark Borchardt. Had he taken the author’s route, he might be another Charles Bukowski. As it is, Trubee is a music man, and his dark, profane and subversively hilarious songs have offended the conservative and mystified even the most progressive listeners for 30 years.

Born in Rapid City, S.D., and raised in Princeton, N.J., Trubee was a banker’s son who describes his father as neurotic and overbearing.

“It was a torturous relationship with my dad. He was John Sr. and I was John Jr., so I became the focus of whatever psychological problem he had,” recalls Trubee. “And it affected me. I grew up looking askew at his values, the normal ‘all-American’ stuff.”

Trubee says his life was ruined at age 13 when he read The Beatles: The Authorized Biography by Hunter Davies in the late 1960s.

“I heard a lot of pop music and it started to intrigue me,” Trubee says. “Pop music back then was really great rock and Motown and Phil Spector and all that.”

Grounded for an entire summer around the same time for starting a fire in a friend’s backyard, Trubee grew out his hair, learned to play guitar and joined his
first band in high school, Gloop Nox & the Stik People. His fascination with music continued to grow.

At the same time, his interest in normalcy went out the window. “I watched these suburbanites, like my dad, get up and take their briefcases and three-piece suits to their commuter jobs,” Trubee says gloomily. “It looked pretty miserable to me.”

Nothing interested Trubee except music, art and books. Yet, even as a teenager, he knew the chances of making a good living in the arts would be hard for a kid with his disposition.

“It’s almost like consigning oneself to poverty and misery,” admits Trubee. “It was a grim choice. I even knew that when I chose to go to Boston, to the Berklee College of Music, I did it in a state of dread and depression.”

The summer before attending music college, Trubee jokingly penned what would become his most famous song, “A Blind Man’s Penis.” Trubee remembers that he was lying around one day, reading the Midnight Globe tabloid. On the back pages, Trubee saw an ad that read, “Send your lyrics to Nashville, make $20,000 in royalties.”

Back in the day, the song-poem was a popular scam wherein publishing and recording companies with names like Hit Records International and Tin Pan Alley would entice the naïve to send in lyrics to be recorded by a band. The scam successfully convinced hundreds to part ways with up to $400 for the “opportunity” to have their poem turned into a bland, lifeless song.

Trubee saw the scam a mile away, but ever the prankster, decided to have a little fun with the Nashville folks. “I said, ‘Why don’t I type out the most ridiculous lyrics I can, offensive and idiotic and vulgar and silly, and send it in to get a rise out of these people?'”

All he wanted was a response that said, “Screw you.” What he got was a letter back with a contract reading, “Dear Mr. Trubee, we find your lyrics very worthy of the full Nashville production, please send $79.95 in remittance.” Startled by the absurdity of the situation, Trubee sent in the check and Nashville sent back an acetate, a one-sided record test pressing, and a reel-to-reel tape with a cowboy named Ramsey Kearney singing and half-speaking Trubee’s lyrics about electric marbles and fornicating with Martians.

His first test audience was his brother Jay, whose laughter triggered something in Trubee: a sense of power, a way to express his eccentric and alienated worldview. “I think that’s why I do music; it’s how I identify myself to the world,” Trubee says.

THE UGLY JANITORS OF AMERICA

You’re the liars and the cheaters,

The dummies and the morons who run the world

—’Leper in the Shadows’

In 1980, after graduating from Berklee, Trubee grew a handlebar biker mustache, packed all of his possessions in his car and drove out to Hollywood. He worked a day job at a film vault and played in a band with Zoogz Rift, a vitriolic and radical rock performer in the vein of Frank Zappa and Captain Beefheart. That first year in L.A., “A Blind Man’s Penis” found its way to a producer, who put it on a compilation album for Enigma Records, Trubee’s first record deal.

Though Trubee’s “collaborative” debut turned out to be a country music number, his music is decidedly electric and rock. His punk and progressive riffs, with fiery guitar solos and extended jams, create a massive, pummeling sound that surprisingly retains a strong pop sense.

One of the first people who took notice of Trubee was a writer for the weekly alternative LA Reader by the name of Matt Groening, who reviewed Trubee in his “Sound Mix” column years before his own comic strip Life in Hell would lead to a television show called The Simpsons. Cassandra Peterson, aka Elvira, also played Trubee while working as a DJ at KROQ-FM. Still, Trubee’s cult status never turned into dollar signs.

“I pursued music not because I wanted to be rich and famous. I didn’t go along with that fantasy,” Trubee says. “It was more of an intellectual exercise—how do I get a piece of music out of my head and into the world?”

Santa Rosa musician, radio host and archivist Don Campau first heard of Trubee in the underground scene and remembers thinking of him as an artist ahead of his time.

“I’ve been involved in underground music and cassette culture since the 1980s, so I knew John’s status for years,” says Campau, who also acts as programming director at KOWS-FM, runs a recording studio and label, and hosts the long-running No Pigeonholes Radio Show, which is now a podcast. “He was always the
kind of guy, like [cult musician]
R. Stevie Moore, that I thought was always one step ahead of where I was.

“We got in touch, became friends,” says Campau. “From the outside, he appears very garrulous, very sarcastic and cynical, but he’s driven creatively; it’s just something he has to do. He sees this as a lifetime achievement.”

Showing sparks of performance art in his work, Trubee also frequently performed poetry rants where he’d get up onstage, scream and yell, wear a gorilla mask and “just act like an idiot, like a buffoon, because I could get away with it,” says Trubee. “A musician friend of Zoogz Rift and mine privately mentioned to him that they thought I was mentally ill.”

After a decade in L.A., Trubee became fed up with the novelty and looked north to relocate. He landed in Santa Rosa, a perfect mix of city and country that meant he could keep a day job and continue to build his bizarre body of work.

These days, Trubee lives alone, travels by bike, obsessively reads a newspaper every morning and refuses to buy a cell phone or subscribe to cable TV. His signature mustache and long hair are now trimmed and turning a nice shade of silver, but his eyes still light up as he talks and his words are measured, though rapidly and candidly delivered.

“I live a simple hermetic life, and keep a lot of distractions and nonsense out,” he says, looking over his record collection. “If I had too many things impinging on me or people making demands on me or what little disposable income I have going out to other things, I wouldn’t be able to do this music stuff. It’s a conscious attempt to keep my plate clear.”

O dear Lord, keep them away from me

“We get plenty of odd music,” says Nate Nauseda, the studio manager and an engineer at Prairie Sun Recording Studios in Cotati. “We have an iconoclastic history here, and John is something even beyond that. I do not know how to describe his music. It is supremely weird. And I love it.”

In the two decades that Trubee has lived in the North Bay, the state of the music industry has only continued to decline, forcing bands to self-promote and sell their records as well as make music. Knowing this, and ever the man of action, Trubee started his own label, Trubee Records, to allow him to record, distribute and promote his music.

Working with Trubee over the years, Nauseda compares him to Zappa.

“I can’t say enough good things about John,” says Nauseda. “He’s an upstanding fellow, he always pays up front and he’s always looking toward the next session. It’s something he’s very proud of, and we’re certainly proud of him.”

Trubee says that Prairie Sun Studio always spoils him with their top-of-the-line analog equipment and knowledgeable engineers. Not much of a fan of lo-fi home recordings, Trubee is willing and eager to use his little disposable income for recording sessions and studio time.

“I do things on a shoestring, but I don’t have to answer to anybody or jump through anyone’s hoops, which is why I can get away with putting all this profanity and ridiculous stuff on records,” says Trubee plainly. “I don’t have anybody telling me no, and I don’t have to fight with other band members. I’m the bandleader, I write the music, I call the musicians and say play this, and they do it. Nobody’s obstructing me, and that’s extremely liberating.”

Regardless of all the anger and profanity and darkness of the lyrics, Trubee considers himself full of life and pretty happy. The irony, he says, is that he likes his day job, which keeps him away from a desk, and working with senior citizens. He says he feels very fortunate and blessed for everything, the good and the bad. He even reconciled with his estranged father last year, shortly before he passed away.

“I don’t apologize for being playful and mischievous and irreverent,” says Trubee. “It’s just who I am, and I think the world would be a better place if more adults were like that. I’m aware that we have to buckle down and work. But that doesn’t mean our imaginations or curiosity have to dry up.”

Still, every time one of his records comes out, Trubee usually gets another friend or family member who inquires as to the state of his mental health.

“I write these dark, weird lyrics that nobody understands, so I must be mentally ill, must be depressed,” Trubee laughs. “At this point, it doesn’t bother me. I think it’s funny. It’s like, who is this nut?”