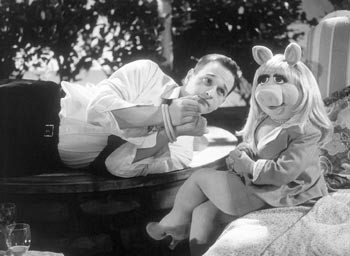 The Muppets still make magic, but ‘Inspector Gadget’ is charmless

MUPPETS FROM SPACE kicks off with something any kid can appreciate: a bad dream. The fretful Gonzo, of the round head and curled proboscis, is racked with nightmares about being the last member of his species. One morning, his alphabet cereal begins spelling out messages from outer space. Miss Piggy, working as a “coffee pig” at a TV station, broadcasts word of Gonzo’s messages, which attracts the attention of a malevolent government agency.

It’s interesting that the Muppets haven’t changed their style in 30 years. These creatures still evince the Old Hippy Dream of communal living in a beat-up Victorian, with a psychedelic school bus in the driveway. (Though the film doesn’t ignore the down side of that life: the long lines to the bathroom or the communal cooking experiments that go bad.) Muppets from Space is laid-back, hippie-style; it’s good to see a children’s movie that isn’t shrieking with hysteria. Plus, the critters still manage to out-express a good third of the Screen Actors Guild.

It is especially funny to see Gonzo pantomime his Spielbergian awe before the majesty of space, Miss Piggy gaping in stage fright before a live television camera, and Kermit the Frog worrying about the upkeep of the house (apparently the lease is in his name).

THE COMPLETELY charmless Inspector Gadget, on the other hand, is merely a kid parody version of RoboCop. John Brown (played by Matthew Broderick) is a security guard blown to pieces in an explosion; he’s reassembled with joke-shop machinery into a half-mechanical crime fighter. The man who exploded him is a Bondian villain named Dr. Claw (Rupert Everett, with an amusing Harvard lockjaw accent), who is planning to use cybernetic technology to build fighting machines.

Brown’s savior is Brenda, the daughter of a scientist killed by the Claw. Joely Fisher, looking like a sleepless version of Sarah Jessica Parker, plays Brenda, a maternal and disinterested love interest. It could be hoped that Broderick’s mild-manneredness would provide a nice contrast to the machinery sprouting out of him, such as the pillar of metal that grows from his neck and the long prosthetic legs that allow him to gallop like a horse. But, actually, Broderick just looks embarrassed.

The locations are one save. The film is set in “Riverton City,” red-brick Pittsburgh, where it previously seemed impossible to make an anxious movie. (In the movie’s most inspired choice, the villain’s headquarters is the imposing PPG building.)

David Kellogg, kicked upstairs after a big career in the advertising racket, directs this movie with the desperate snideness, noise, and franticness of a dozen kids’ cereal commercials slammed together. Watching it is like listening to a cymbal soloist play for an hour and a half.

‘Inspector Gadget’ and ‘Muppets from Space’ play at theaters across the county.