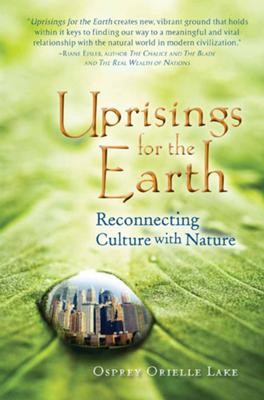 “I think women are the key to making the change,” says Osprey Orielle Lake, author of Uprisings for the Earth: Reconnecting Culture with Nature. Lake, who appears Jan. 19 at Copperfield’s Books in Santa Rosa, is referring to women’s leadership in addressing climate crises. “Women have something we need,” she adds, “and right now we need to lift it up and get it in the mix.”

Lake, director of the Marin-based Women’s Earth and Climate Caucus, says the “something” that women have is a unique relationship with nature. “Women have a very special relationship with the earth—not better than men’s, but different—and because we haven’t heard women’s voices in the culture, part of changing the dynamics is hearing from them,” says Lake. “It’s part of what’s needed right now.”

Apparently, it’s been needed for a long time in the United States. For a sustainable society, Lake writes in her book, a “full story of human history that equally reveres both genders is crucial.” Part of that story is purely visual to Lake, a sculptor, who points out that of the 210 statues in the U.S. capital, only nine are of female leaders.

A story in chapter four tells how Congress re-rejected a statue depicting suffragettes in the capitol rotunda as recently as 1995. The statue—of Susan B. Anthony, Elizabeth Cady Stanton and Lucretia Mott—had been banished to storage in 1921, returned by women leaders in 1995, then sent to the basement by an all-male Congress “not sure the women’s contributions had been significant enough, and that the women were too unattractive and too old.” The women leaders then had to shame Congress publicly—and raise $125,000 privately—to get the suffragettes back on display.

Despite historical suppression, women may be powerfully reshaping the conversation about climate. Lake’s book describes research by communications experts showing that “foundations directed by or primarily made up of women are particularly interested in the root causes of social and environmental problems,” and that “women are willing to face issues directly and insist on change at a systemic level, not just settling for superficial or short-term solutions.” (This explains why Congress wanted those suffragettes in the basement.)

If climate change is going to be addressed effectively, Lake writes, women need to lead from all levels of all society. Lake refers to United Nations studies indicating that when women are informed and educated, major improvements occur, from population stabilization to more sustainable communities. “We know that women are the ones producing most of the food in the world,” Lake says. “They are the ones who collect the water for the family’s daily needs and cook the food. Where people don’t have access to stoves, they are going out and chopping down trees to burn. And where there is no clean water they walk to carry it back, sometimes two to six hours of walking.”

In Cameroon, the leadership of African geologist Rosemary Enie resulted in trainings where village women learned how to use low-cost technology to live more sustainably, including learning how to collect rainwater, build water storage tanks, test water for bacteria and sterilize it when necessary. There are also workshops for building solar stoves.

Here in the North Bay, it’s the consumer angle. “In the U.S., over half the wealth is in the hands of women who are behind 80 percent of all purchasing decisions,” says Lake. “How do we influence that 80 percent to drive us toward clean energy decisions? Women are more important than their power to purchase, but when we’re talking about a climate crisis, we have to shift our economies. And one important tool is purchasing power.”

Lake quotes Elinor Ostrom, Nobel laureate in economics: “We need all levels of human society to work on this to be effective in the long run” including the “networks of people [who] have been neglected as players. . . . We need to take action on smaller levels.”

“It’s not about putting men down,” Lake insists. “It’s about lifting women up, and about men and women working together for climate protection and improving our world.”