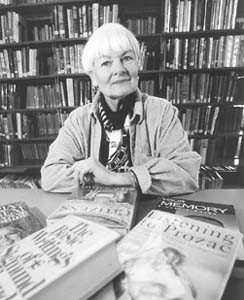 FOLLOWING those first eight weeks sitting in a courtroom in downtown Napa, writer Moira Johnston thought that her newest book was finally finished. She’d spent years on it already–months of meticulous research, soaking up every detail as Napa wine seller Gary Ramona sued his daughter Holly’s therapists for malpractice, and Holly staunchly defended the horrifying accusations that started it all. While undergoing therapy for serious eating disorders, Holly had come to believe that her therapists had uncovered traumatic “repressed memories” of being raped by her father from the time she was 5. Ramona, insisting he was innocent, had accused the therapists of implanting those memories in his daughter’s fragile mind.

It was a hell of a story, but the “memory trial,” as it came to be known nationwide, was only the beginning of an even bigger story–covering everything from eating disorders in America to the nature of truth itself–and Johnston had become determined to tell it well.

A meticulous and accomplished journalist with several books to her credit, Johnston managed to maintain a professional objectivity right up to the moment that the jury delivered its guilty verdict, slapping the therapists with a $500,000 judgment. By that point, supported by hours of research into the science of memory, Johnston had herself arrived at the same conclusion as the jury: that recovered memories of abuse are so unreliable and easily contaminated as to make them all but useless, either as a therapeutic tool or as evidence during litigation. As the legal and therapeutic professions reeled from the verdict, Johnston began to write.

“Then, thinking I was done, I went on a trip to Massachusetts,” she recalls, “and ended up making a pilgrimage to Salem. I found the memorial park there, honoring the innocent people who’d been killed during the witch trials of 1692. It’s a bleak place, walled in granite. The victim’s last words are carved onto stones under your feet, words like ‘God knows I am innocent!’ Until the courts put a stop to it, all the victims were convicted, on the basis of what was called ‘spectral evidence,’ visions of the devil or of evil spirits that were claimed to have been sensed by hysterical young women.

“I knew, standing there, that I would have to go back and rewrite the beginning of my book,” she continues. “I knew that the story of Gary and Holly Ramona had to begin in Salem, Massachusetts.”

Johnston’s rewrite became Spectral Evidence: The Ramona Case–Incest, Memory and Truth on Trial in Napa Valley (Houghton Mifflin; $25), released last November to a noisy round of debate. Immediately hailed as “the most powerful and influential book of the ‘recovered memory wars,'” by author Frederick Crews–who himself co-authored the earlier book The Memory Wars–and by members of the growing False Memory Syndrome Foundation, Johnston’s work was likewise criticized by proponents of the recovered-memory movement for not coming down, in the end, on the side of the repressed memory.

Even so, Johnston takes great pains in the book to avoid painting Gary Ramona as a martyr; his own culpability is demonstrated by his virtual absence as a father and by his failure to recognize and seek help for his obviously troubled daughter.

JOHNSTON, a Canadian native and longtime Napa resident, admits that she is warming to her position at the center of so vital a controversy. As such, she will be delivering a talk this week, titled “Memory & Creativity: A Writer’s Search for the ‘True’ Story,” as part of the arts and culture lecture series sponsored by the Arts Council of Napa.

“Here was the biggest mental-health controversy of the century,” she says enthusiastically, sipping a cup of coffee in the Independent’s lunchroom, “a controversy that was tearing psychology apart, tearing families apart, tearing the legal system apart, and yet here it was focused on a 100-year-old courthouse in downtown Napa, five minutes from my house.”

A POLISHED, articulate conversationalist with a warm smile, Johnston insists that her conclusions were not reached hastily, and, contrary to those who say her book is unsympathetic to the cause of abused women, were informed as much by her compassion for the abused as for those falsely accused.

“All of us are more than willing to embrace the concept of forgetting and remembering,” she says. “We want to put all of our resources into identifying the genuinely abused, so that they can be cared for. But for the Holly Ramonas of the world, who have no proof, who are discredited in court again and again and again, to become the fallen poster children for this hysteria has done such damage to the integrity of those who are victims of child abuse.

“I’ve never had, I guess you could call it a cause, that I’ve cared about so deeply,” she adds. “Because family matters to me more than anything in the world, and we can no longer afford a loss of families in this nation of already shattered families.”

The answer to the Ramonas’ dilemma, Johnston says, is contained within the metaphor of an empty dinner table. “What it finally came down to–and what the jury attributed a portion of the blame to Gary for–was that this family never ate dinner together,” she explains. “Gary Ramona’s job was to take the Mondavi Winery and to sell the idea that there was no better or more civilized thing in the world than food and wine and people gathered together at the table.

“But Gary was a busy man,” she continues, “a successful executive in a culture where good daddies are busy daddies, off earning money for their families. The failure of this family was their failure to know that their child was troubled in time to stop it before it became clinical depression, bulimia, and ultimately recovered memories.

“That’s the most easily applied message to come out of the book,” Johnston adds. “One friend came up to me and said, ‘Moira, I get it now. I don’t care how busy I am, from now on Wednesday is family night; we’re cooking, we’re eating, and all of the children will be there.’

“The best line in the book, I think, is a quote from one psychologist in Napa,” she softly concludes. “‘We have deified our chefs,’ he said, ‘and starved our children of nurture.’ In that, if nothing else, the Ramonas’ story hits us all where we live.”