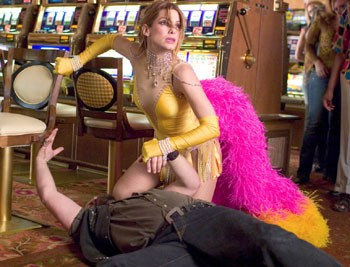 Harley Jane Kozak gets a kick out of ‘Miss Congeniality 2’

Harley Jane Kozak does not go to the movies much anymore, not unless the movie features animated fish or fluffy day-glo animals. She tells me this as we take our seats in the sprawling Metreon theater complex in San Francisco, where I am about to treat the L.A-based author, actress and mother of three to an afternoon matinee of Miss Congeniality 2: Armed and Fabulous. So movie-deprived has Kozak been, that when the Metreon throws no less than eight high-volume previews at us (everything from Monster-in-Law and The Longest Yard to Fever Pitch and The Sisterhood of the Traveling Pants), my guest is fairly delirious with joy.

“I guess it’s just a reflection on how long it’s been since I went to a movie that wasn’t made by Pixar, but I found all the trailers to be really exciting,” Kozak laughs, cradling a cup of coffee after the show. “Just the idea that I was sitting in a movie theater watching trailers was exciting. It’s been so long.”

It’s been even longer since Kozak made a movie, having put her career on hold to raise her kids. Though she has recently accepted a small part in an independent horror film called Sorrows End (“It’s two days of work and my head implodes. How could I say no to that?” ), after years in the business, with prominent parts in such movies as Arachnophobia, Parenthood, When Harry Met Sally, Dark Planet and The Amy Fisher Story (Drew Barrymore version), Kozak says she’s happy enough taking a break to be a mom.

Of course, she also writes books.

“I like books and movies that are stitched together from different genres,” she explains. “So of course I loved Miss Congeniality 2.”

For those who missed the trailer, it stars Sandra Bullock in the follow-up to her 2000 hit about tough, fashion-challenged FBI agent Gracie Hart. The first one was a romantic comedy, as agent Hart gradually falls for another agent played by Benjamin Bratt. In the sequel, Bratt is gone, and so is any hint of romance. This one is a buddy-comedy in which Hart is paired with an even tougher agent, played by Ray‘s Regina King, and the two take turns walloping the bejeezus out of each other on the way to becoming best friends.

“I liked this one better than the first one,” Kozak says. “But then, I’ve never seen the first one all in the way through because I always catch it on TV while I’m folding laundry or something.”

“It was really obvious to me,” she continues, “that this film is one of those cross-genre films. It marries a lot of the conventions of action-adventure with most of the elements of romantic comedy. And that’s exactly what I’m playing around with in my books. How far can you stretch the various genres? What can you take out or sneak in without turning them into a completely different genre? What I loved was that they took a romantic comedy and just removed the romance. And it worked.”

The other thing she enjoyed about Miss Congeniality 2 was the realistic female-on-female butt-kicking. It turns out that Kozak is a student of Krav Maga, a form of martial arts taught in Israel to the army and to law enforcement. It’s become very popular in Hollywood, and in her latest book, Kozak’s leading lady attends a hilarious Krav Maga class.

“Krav Maga is essentially street fighting,” Kozak explains. “I took an introductory class, and I loved it so much I signed up for a year. That was two years ago, so now I’m, like, a yellow belt.”

“Punching and kicking, yeah,” she smiles. “Putting people in choke holds. Breaking fingers. Gouging out eyes. Fun stuff like that.”

“So the stuff Sandra Bullock and Regina King do to each other in Miss Congeniality 2, you can do all that?”

“I can,” she says, happily. “That’s why I loved those scenes so much. I loved what those women were doing to each other. I really wanted to have the pause and replay. Someday, I’ll get the DVD of this, so I can watch them beat each other up over and over.

“What can I say?” she shrugs merrily, “I’ve been deprived. But it really was fun to watch.”