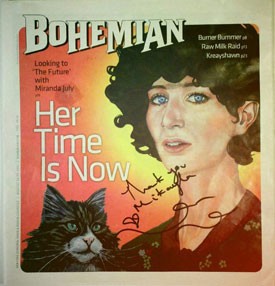 The news is out: Miranda July is pregnant and has a child on the way.

At July’s City Arts & Lectures appearance last night at the Herbst Theater in San Francisco, the subject of the writer, actor and director’s treatment of children in her work was raised. (Children play a considerable role in her 2005 film Me, You, and Everyone We Know.)

At that point she took the opportunity to let the audience know that she was expecting a child herself.

Read our interview and cover story on Miranda July by Leilani Clark here. (Hat tip to Mikayla Butchart, who attended last night and who painted July’s portrait for our Bohemian cover. Yep, that’s her autograph!)