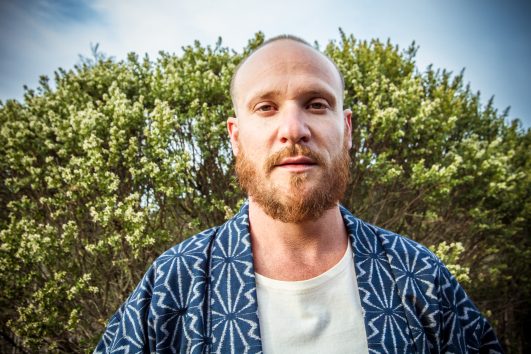 Berkeley folk and world music artist Mikey Pauker is already known in the Bay Area for his open-hearted melodies and catchy reggae beats, though fans are in for a different musical dimension when Pauker unveils his new album, ASCENSION, with an album-release concert on Jan 25 at Key Tea in San Rafael.
Drawing on influences that range from Bob Marley to The Police, Pauker’s output up to this year have heavily relied on electronic flourishes, yet ASCENSION departs from that aesthetic with a raw instrumental sound captured in live recording sessions under Grammy-nominated producer Warren Huart.
Thematically, ASCENSION takes inspiration for the outpouring of communal strength and resolve that manifested after the North Bay wildfires as well as the hurricanes that impacted Texas and Florida earlier in 2017. With a background in Yoga and mystical practices, Pauker’s sound aims to elevate the listener’s spirit with devotional songwriting.
Be the first to hear ASCENSION’s uplifting music when Pauker plays a full band set tomorrow, Jan 25, featuring opening act Annie Anton and a post-set DJ party at Key Tea, 921 C St, San Rafael. 7:30pm. All Ages. $20 at the door. For details and tickets, click here.

Charlie Swanson
Charlie Swanson is a North Bay native and an arts and music writer and editor who has covered the local scene since 2014.
Previous articleCali Growers Association Sues State Ag Dept over Acreage Flip-Floppery
Next articleDay of Prayer and Action for Condemned Author Jarvis Jay Masters