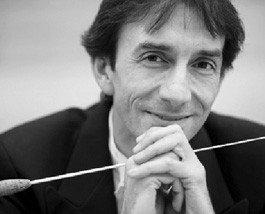 On a rainy afternoon in October, Bruno Ferrandis is settled in front of a fourth-floor window overlooking downtown Santa Rosa. In the approaching week, he will be officially instated as the new conductor of the Santa Rosa Symphony, and he explains in no small detail the most important lesson he learned about the position while studying in New York with Leonard Bernstein.

“Lenny was a superb musician, and he was able to communicate so well,” Ferrandis says, sipping from a mug of hot tea. “But before everything, he was himself. He was not playing a role, he was just being himself. If he needed to use the word ‘fart’ in rehearsal to make a tuba or brass player understand what effect he wanted in the music, he would not hesitate one second.”

Like Bernstein, the 46-year-old Ferrandis excels at the art of being himself. He speaks six languages, has a taste for the avant-garde in dance and opera, has worked with film director Atom Egoyan and studies ancient Hebrew and Greek for pleasure. Those expecting the stiff upper lip of a traditional classical director will instead see a charismatic man of gusto when Ferrandis makes his inaugural walk to the podium on Oct. 14.

On this rainy day, having just traveled from his home outside of Paris, the maestro is lively, expressive and earnest; the more excited he gets, the more endearing and fractured his English becomes. He continues on about Bernstein.

“In Europe, people tend to be more reserved or academic, especially the European maestros,” he frowns. “Either they put a tantrum on you if what you do is not correct, or they reserve their opinion and they give it to you out in a very plain, academic way. And Lenny was all but not that! Everything was all the contrary.”

Dressed in a simple black suit, Ferrandis’ tall frame is topped with dark hair showing slight, emerging strains of gray, his wide eyes textured with equal parts of experience and vigor. While speaking, he looks directly at his subject in a locked gaze, making elaborate, nondescript gestures with his hands. He holds his fingers up into numbers, draws outlines of imaginary objects, simulates piano playing on the edge of the table and routinely punctuates his phrases with small motions, as if reaching for a baton.

Although he has been immersed in classical studies from the age of five, he explains that “it’s part of my history to listen to other music, because my parents are not classical-music-based, they have a different background. We were listening to the Pink Floyd, my father finding the group very interesting; the sounds were modern for the time, it was not your classical rock music. I listen to a lot of different things in my life. Always. I’m curious. By nature, I’m a very curious human being.

“I am always being impressed with people like Sting,” he continues. “Very much impressed with his capacity to not only invent a song with very good lyrics but also the orchestration beyond. Very, very simple and very well done. As pop singers, there’s Björk. I don’t know if you know that person, Björk. The Icelandic person. Incredible person! And as a youngster, since I practiced double-bass, I was very much taken by all the American funk people. I was impressed with Jaco Pastorius, I was impressed with people like Stanley Clarke, with Earth, Wind & Fire, with Stevie Wonder. Again, very much intrigued by the orchestration. Frank Zappa–a very interesting feature of American music. A very rare person, a very special artist.”

Despite the looming influence of American iconoclasts, Ferrandis says that he was not much of a troublemaker as a child. “My revolt was more inside than outside,” he explains. “What I hated about the French academic system is that in France, you are rigidly imposed what to do, what to learn and that follows that.”

When he left his studies in France to accept a position in London at the age of 21, he found he had much more breathing room. “The Anglo-Saxon system of teaching is to give you the output,” he says, “and you take the material, and you do what you can with it. You sort of manage it. Your way. And that, I really appreciated the difference.”

Since then–including a 10-year run at Juilliard leading the Opera Center and the Pre-College Orchestra, picking up extra money playing after-hours piano in various Manhattan bars–Ferrandis managed his music career in his own way. He worked with a variety of modern composers including Pierre Boulez and Luciano Berio, and he has conducted all over the world, from Israel to Hong Kong, covering most of the standard classical repertoire as well as conducting a real-time score for Fritz Lang’s Metropolis, one of his favorite films.

“I must say that the movies of today have disappointed me greatly,” he laments, launching into an overview of the silver screen. “I think that on the French side and on the American side of moviemaking, today there is no poetry. There is nothing that transports you very much so, other than production and lots of materialistic costs.”

“But in general I am an old-timer,” he adds. “Something like Spartacus by Stanley Kubrick is a great movie for me. The music is extraordinary. There’s always a link between the music and the film for me. I like Charlie Chaplin very much for his sense of being the saddest and the funniest at once–the extremes of life.”

“I like some, some of Woody Allen’s movies. Not all, but some. I like very much the movies where the dialogue is very strong. The scripts are very important. Lubitsch, Ernst Lubitsch. I like also Japanese movies, the old ones. The Seven Samurai. Also, I have a liking for certain types of Italian movies. Fellini’s Prova d’Orchestra, Comencini, Rossellini.”

Ferrandis expresses similar zeal for the opportunity to premiere modern classical works alongside repertoire standbys. “We have the Magnum Opus Project,” he says, alluding to the new works commission project funded by patron Kathryn Gould, “which is very reassuring to me because I would not have come to a place where new music was completely barred from being in the program. Now, what I want to do is to promote that music, but to do it with taste, and to do it by not mixing the ingredients at the wrong moment–like you do when you do cookery.”

With a plan to relocate to the Bay Area with his fiancée and two-year-old daughter, Ferrandis is unconcerned about coming to America amidst heated political atmosphere. When asked his feelings about this, he gently bites his hand, pondering his words carefully. “First of all,” he says, “even as I apprehend myself, as a Frenchman, the judgment of all American people has changed about this war and its necessity.

“I don’t know more than that and I don’t want to judge on that,” he says. “All I can say is the people of this community have been extremely nice to me, and I’ve never felt any rancor or any kind of negative feeling about that fact that I was French. On the contrary, it is all positive.”

Ferrandis’ real burden comes from taking the place of longtime, much-beloved music director Jeffrey Kahane, and understanding the oversized shoes that he has been asked to fill. “Mr. Kahane is a wonderful artist and a great conductor,” he says, “and on top of it, a great pianist, which I envy very much, since I am not! I have a very big sense of responsibility. I’m very honored, very excited to be here, to fulfill that position. And now, I let the public judge on my work.”

The public, of course, has already spoken its approval for Ferrandis with his triumph in the Santa Rosa Symphony’s homespun version of American Idol last season, in which seven guest conductors vied for the podium. “I loved the fact that the audience had their say, children had their say, members of the board had their say, musicians had their say,” Ferrandis enthuses about the unique process. “I feel that my election, so to speak–it’s not political because it’s artistic, but it is an election–was at least done in the most possible democratic way. I loved it.”

Looking out the window, I ask if he has noticed the banners draped along the streets of downtown Santa Rosa, proclaiming his arrival. “Yes, I’ve noticed that, to my dismay,” he laughs. “I would not have necessarily presented it that way, put myself on a banner. But I think, ‘Why not?’ It’s what is felt with the orchestra. I am a man of consensus. I like that everybody’s happy.