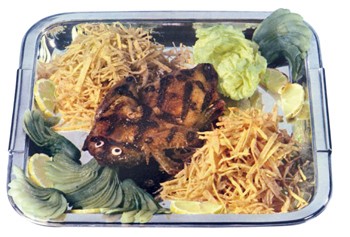 Colored Cheez Whiz has nothing over jellied tongue on Halloween

With all of the bright colors and artificial flavors in food these days, it’s fairly simple to cobble together a menu for entertaining guests around the time of All Hallows Eve. For instance, a quick swoop through the Internet will yield recipes for boogers on sticks (pretzel sticks dipped in green-tinted Cheez Whiz) or vampire-blood soup (tomato soup). That’s all well and good, and–in the case of Cheez Whiz of any color–even mildly scary.

But why stop there? Gummy worms, cherry jello and cold, cooked spaghetti might make acceptable stand-ins for ectoplasm and wriggly casket-crawlers, but they won’t impress any crowd older than your fourth grader’s classmates. If you really want to freak people out, there’s no need to stock up on something as tame as chocolate balls wrapped in foil embossed with eyeball designs. The Holy Grail of bone-chilling cuisine lies at what our modern tastes would consider yesteryear’s juncture of refinement and barbarism: meat in costume.

What is meat in costume? Think of salmon mousse served from a mold in the shape of a fish or vegan meat substitute formed in the shape of a chicken drumstick; it’s food in masquerade. The practice of dressing meat in disguise stretches back centuries. Some of it was done playfully, some out of necessity. In any case, our ancestors conjured up these dishes in all sincerity.

Precedent, however, does nothing to temper cringe factor. The perceived horror of serving “variety meats” lies in our contemporary disconnection with where our food comes from; we don’t care to be physically reminded that pork comes from a pig by the presence of intact pigs’ feet on our tables, especially when the origins of pork tenderloin medallions are so visually abstract. Ethically, if eating one part of a dead animal is OK, then eating any part of a dead animal should be OK. But these days, the closest most folks get to polishing off trotters is a box of animal crackers.

Reverence for the past notwithstanding, the concept of meat in costume is a little hard to swallow. Remember the preposterous scene in Indiana Jones and the Temple of Doom where the Kali-worshipping maharaja served a banquet of live snakes and chilled monkey brains to Indy and his cohorts? The beauties described below, my friends, make that dinner as unassuming as macaroni and cheese.

The following feast would not be possible were it not for the existence of Simon and Schuster’s 1958 compendium The Art of French Cooking, itself an American edition of an earlier French edition, Ernest Flammarion’s L’Art Culinaire Francais. I used to own both editions, identical except for the language of the text, but I gave away the French version to someone who could actually speak French. Somewhat like Escoffier’s Le Guide Culinaire, The Art of French Cooking presumes an interface of culinary literacy between its author and reader, and therefore is more of a brisk how-to than an actual cookbook. Its recipes are very French and very traditional–trad with a capital T, in fact. I am certain that many of them, once prepared, are truly exquisite.

But there are others that are truly messed up. The color reproductions that accompany the text are largely responsible for this impression. Somewhere in the color separation, the reds turned out orange, dark browns gained violet and blue undertones, and shares of burnt sienna and raw ochre overtake most everything else. The food, shown arranged on platters against a neutral background, is presented with all the finesse of a mug shot, and many of the dishes’ veneers of broiled Mornay sauce have the appearance of an entrée that’s spent a few too many minutes neglected under a heat lamp at the pickup window. It’s hard to discern the difference between the photos of sole fillets Marguery and sole fillets Chauchat, because they both look like gratinéed puke. Really, the pictures make the book–in the worst of ways.

Take the picture of squab dressed as a toad. Squab dressed as a toad belongs to a family of foods that we will call “in costume”–perfect for Halloween entertaining! First off, get yourself a squab (the less kinder of us call it “pigeon,” though take heart–the ones you buy frozen at the specialty food store were in all likelihood not hijacked off some statue in the park). To dress the squab as a toad, according to AFC, you “stuff the feet into an opening in the belly, then split the bird horizontally from the tip of the breast to the wing bones, dividing it into two parts, the carcass (the back) on one side, the breast on the other, connected by the joint in the wings. Prepared this way, the squab looks like a toad.” It’s that easy!

If you are having problems visualizing all this, worry not: AFC‘s photo illustration of squab dressed as a toad will quell all of your uncertainties. Also, the picture whimsically suggests garnishing the “face” of the squab/toad with tiny rounds of truffle and mushroom standing in for the eyes of the goggling toad, lest your guests be too thick (or stunned) to realize your feat of culinary disguise.

Another fine way to incorporate costume in food is to garnish meat with triumphant remnants of its former self. Hence, galantine of pheasant in plumage. A galantine is a forcemeat of poultry or game fowl that’s stuffed into the meat and skin of the boned bird, then poached. That in and of itself is no big deal, but to serve it in plumage, you take the feathered head, wings and tail of the pheasant and fasten them to a base of bread with toothpicks, somewhat like shortcut taxidermy. Place the plumed death mask in the center of a platter and arrange slices of the galantine around it. Your guests will be certain to comment on the novelty of having louse-ridden feathers in such close proximity to their charcuterie. There is also the boon of a readymade costume for any guest not arriving in Halloween garb. Simply detach the plumage from the bread hunk and affix to the grateful fellow.

For those who are not so lucky to have providers of game fowl, there are many other manifestations of meat in costume, and you need look no further than Time Life Books’ vastly informative and user-friendly Good Cook series. Produced in the early 1980s under the consultation of well-respected culinary authority Richard Olney, Good Cook volumes such as Pasta, Fish and Vegetables are truly valuable reference tools.

And then there’s Variety Meats. I’ve enjoyed a sweetbread or tripe pickle in my day, but Variety Meats crosses the border of offal, dabbling into a parade of ghastly anthropomorphic juxtapositions of tangible body parts amidst carefully executed garnishes. Case in point: tongue in aspic. Variety Meats‘ tongue in aspic is no mere assemblage of thinly sliced tongue shimmering under a dainty glissade of aspic, no; it’s the whole goddamn tongue of a cow, poached, peeled and curled to fit in a gigantic round mold lined with slivers of zucchini and carrots. This way, the uncut, unmolded aspic quivers innocently on its platter, yielding not one hint as to its muscular contents. Once sliced open, your guests will shudder at the massive cross-section of pink meat inside. You almost expect the thing to break free and give you a big wet one.

There’s only one way to follow up a first course of tongue in aspic, and that’s a stuffed calf’s head. Stuffed calf’s head permits humble foods like ground pork to arrive at your table in high Halloween style. Variety Meats recommends boning the calf’s head and reserving the brains and tongue for another use (perhaps freeze them for Thanksgiving). Sew up the eyelids and the neck, leaving the ears intact, and stuff the filling of ground pork and veal into the open mouth of the calf’s face.

The picture illustrating this step appears at first to depict a kind act of a human hand-feeding a drowsy calf, until you realize the head is disconnected from its body. After gently poaching the head, slice it into rounds and garnish the serving platter with one calf’s ear on each side.

Even after toiling many hours in the kitchen dressing up your meat to the nines, it may be beneficial to have a plan B up the flowing black sleeve of your Elvira costume. In the face of culinary disaster or guest rebellion upon first slicing into tongue in aspic, herd your hoard of hungry Halloweeners to the car and caravan to the nearest Albertson’s or Safeway, where you can gather the Cheez Whiz and gummy worms you forsook in the first place. Look at the ingredients listing, and prepare to be scared anew.