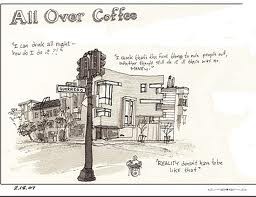 May 22: Paul Madonna at Book Passage

In the wonderfully weird world of media, there’s an old saying: “If you run a cartoon of sketch drawings of the city accompanied with slice-of-conversation observations that delights half your readership but makes the other half livid, then you’re doing something right.” Such is that case with Paul Madonna’s All Over Coffee, which has been dividing readers of the San Francisco Chronicle since 2004. Madonna’s got an effective ace in the hole, though; even the strip’s most dedicated haters are tickled each time they recognize a scene from the streets of San Francisco. Madonna discusses his new book, Everything Is Its Own Reward, on Sunday, May 22, at Book Passage. 51 Tamal Vista Blvd., Corte Madera. 7pm. Free. 415.927.0960.