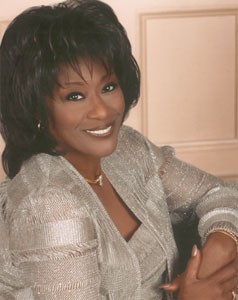 It’s only 10am, but Marlena Shaw has already been out doing some Christmas shopping, trying in vain to find the television that her husband really, really wants. Every store is sold-out, but she’s keeping her cool.

“A lot of my life in show business has been the same way,” the singer says by phone from her Las Vegas home. “I expect something to happen and it doesn’t happen, but then something better comes along.”

In recent years, something better indeed has come along for Marlena Shaw. Though her impressive jazz career has included working with Sammy Davis Jr. and Count Basie, recording over 20 albums and performing steadily for nearly four decades, Shaw–who appears Jan. 14-15 at the LBC–is just one of many artists who owes a resurgence of interest to hip-hop sampling.

I first heard Marlena Shaw five years ago on DJ Shadow and Cut Chemist’s Brainfreeze CD, a mix made entirely of snippets from old funk and soul 45s. The DJs only used one verse, but that’s all it took to realize that something incredible was happening–the swirling orchestra, the funky drums, the playful, sultry vocal. The song, “California Soul,” may simply be one of the greatest soul songs ever recorded.

In a heavy groove, this track describes the pulse of life in California and the special brand of soul that only California could give birth to. It feels intimate, like the singer is sitting down and telling you all about it, but at the same time it feels like a late-night beach party.

I hunted record stores high and low, but no one had a copy of “California Soul” until at last I found a reissue on vinyl of the original album, The Spice of Life, one of the greatest soul albums ever recorded. Not that anyone would know. Sadly, the album–in fact, most of Shaw’s fantastic output for both Cadet and Blue Note in the ’60s and ’70s–is unavailable in the United States; you can’t even find “California Soul” on iTunes. Copies of the original 45 routinely sell for $100 and up on the collectors’ market, making the song–and in many ways, Marlena Shaw herself–a lesser-known gem in the world of soul music.

Credit has not always fallen where it is due, however. When I bring up the Gang Starr classic “Check the Technique” from 1991’s Step in the Arena, which loops the “California Soul” drum intro, she has no idea what I am talking about. St. Germain’s “Rose Rouge” from the bestselling Tourist album relies almost entirely on a Marlena Shaw sample, yet Blue Note refuses to negotiate any kind of financial compensation for it.

I mention my quest for “California Soul,” and she laughs. “I’m telling you, it has been all over the place,” she says. “During one newscast, right before Arnold Schwarzenegger was running for governor, they introduced him in California and sure enough, they played ‘California Soul,’ and I said, ‘Now you’ve gone one step too far!’

“Of course,” she adds, “the things that I’ve written that have been sampled, you know, it’s nice to get some of those checks, so it has been very good for me.”

The years have been kind to Shaw’s talent as well, and the recent interest in her work has reinvigorated her newer material. Her signature lyric delivery is still in full effect on her latest release, Lookin’ for Love (441). Standards such as “You Don’t Know What Love Is” and “For All We Know” shine like the diamonds they were meant to be, and she sings a biting, bluesy rendition of Cannonball Adderley’s “Mercy, Mercy, Mercy.”

One thing that has remained constant in Shaw’s career is her longstanding penchant for social commentary. In the late 1960s, this was manifest in empowering songs like “Liberation Conversation” and “Woman of the Ghetto.” Shaw even titled a 1975 album Who Is This Bitch, Anyway? At the time, the title raised eyebrows.

In 2004, Shaw is still commenting on the state of the world. On her new album, it takes the form of the ode, “Hope in a Hopeless World.”

“I am seeing so much that is disheartening to me,” she says. “People don’t seem to have the heart anymore, the way we used to. We should be further along in helping our fellow man than we are, but it seems to have gone the other way.”

After 40 years in the business, Shaw exudes a warmth that is the crucial backbone of her singing style, and she’s thrilled about her upcoming shows in Santa Rosa. “I am definitely planning on doing the good stuff,” Shaw promises. “I always have some little surprises, you know.”