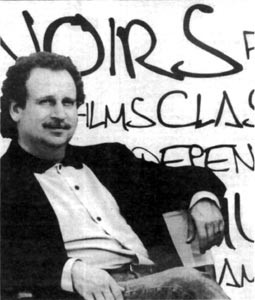 A Life in Film

ASK MARK FISHKIN, co-founder of the Mill Valley Film Festival, about his most embarrassing moment at the popular North Bay event and he shakes his head and moans. “There’s always the story about the time we showed Nicholas Ray’s last feature a dozen or so years ago,” he recalls, nursing a cup of espresso at a Petaluma riverfront cafe. “We were doing a tribute in memoriam to him. Acting legend John Houseman was in the audience, sitting next to me. We were going to show a short clip from Rebel without a Cause before showing Lightning over Water, his last film.

“Instead, the clip from Rebel without a Cause went on and on and on. Houseman turned to me and said, ‘Mark, are you going to show the whole movie?'” says Fishkin, impersonating the late thespian’s droll speech.

“I said, ‘No, of course not,’ and went up to the booth to find out what was going on. I found the projectionist lying on the floor with the whole print of Lightning over Water on top of him–he had dropped the platter.

“He looked up at me, red-faced, sweating, his eyes twice their normal size, and said, ‘It’s OK! It’s OK! Give me five minutes to fix it!’

“I spent the next half hour running back and forth to the concession booth and handing out free popcorn and wine before finally announcing that the tribute had to be canceled. It took the projectionist all night to put the print back together.”

These days, the popular film festival–which attracts a large contingent of Sonoma County film buffs–operates much more smoothly and has become quite prestigious.

The 21st annual Mill Valley Film Festival runs Oct. 1-11, with screenings held at the Sequoia Theatre in Mill Valley and the Lark Theatre in Larkspur. The fest will feature a wide selection of independent films and dozens of international features, including several world and U.S. premieres, a tribute to British actors Derek Jacobi (Love Is the Devil, I Claudius) and Helena Bonham Carter (A Room with a View, Howards End), several filmmaking seminars, and a children’s film series. It opens tonight with a screening of poet Maya Angelou’s directorial debut Down on the Delta and closes with the modern fairy tale Pleasantville, the new film from Gary Ross (Big, Dave).

Over the years, Fishkin adds, the film fest has become “more than a sum of its parts,” helping both independent filmmakers who don’t get enough support in the marketplace and a public faced with an increasingly narrow range of choices at the box office.

“I believe film gives us the ability to see who we are, where we are, and how we relate to each other, to the planet, to political, environmental, and social issues.”

Ironically, it was filmmaking, and not film programming, that lured Fishkin, a New York native, to the Bay Area in 1976. “I once heard Francis Coppola at the Telluride Film Festival talking about good ways to break into the film industry,” Fishkin says. “He confirmed my gut feeling that it should be done through screenwriting.

“Of course, I had visions of six figures dancing in my head.”

Appalled that a community the size of Marin had virtually no alternative cinema, Fishkin began programming a weekly College of Marin film series. For a while, he considered buying the old Plaza Theatre in Petaluma (now the Mystic Theater & Dance Hall), but decided it would cost too much to remodel the aging movie house.

He later took over Mill Valley’s legendary Saturday Night Movies held at the local Odd Fellows Hall. It was a logistical nightmare. The small staff, mostly student volunteers, had to set up and tear down folding chairs between each show. And then there were the auditorium’s poor acoustics.

“The sound in the hall was so bad that I really could only show films with subtitles,” he laughs.

When the “losses became too much and the headaches too great,” Fishkin bailed out of the enterprise. In October 1977, he and fellow film buffs Rita Cahill and Lois Cole organized a three-day film festival. It featured three film tributes, Coppola’s Rain People, and George Lucas’ The Filmmaker.

“We did a very innovative program that I would not be embarrassed to repeat today,” he says.

It was a big hit. Since then, the fest has gained considerable stature in the industry. It now ranks as one of the top U.S. film fests. Among its success stories was the 1987 world premiere of Walking on Water, with Edward James Olmas and Lou Diamond Phillips. That film later went on to achieve critical acclaim and commercial success as Stand and Deliver. It received a 10-minute standing ovation at its premiere.

Fishkin is especially gratified at the role the film fest has played in nurturing such independent films as The Crying Game, My Left Foot, Like Water for Chocolate, and Strictly Ballroom–films that until recently would have enjoyed only a limited audience but which have gone on to widespread success. “That’s encouraging,” he says. “I also feel some gratification that our growth has paralleled the growth of the independent filmmaker movement.

“I think we’ve had some role in that.”

And even though that early ill-fated homage to Nicholas Ray ended in disaster, many of the fest’s other tributes have ranked among Fishkin’s most memorable moments. Among those who have been spotlighted are Olmas (Zoot Suit, American Me), John Frankenheimer (Seven Days in May, The Year of the Gun), and Jack Arnold (The Incredible Shrinking Man, The Creature from the Black Lagoon).

“It was an especially great thing to see how the audience responded to Jack Arnold,” Fishkin points out. “People came to the midnight screening of The Creature from the Black Lagoon in 3-D glasses and even brought their kids because they wanted them to experience this classic horror film.

“Jack wasn’t in very good health even then, but he just wanted to acknowledge the crowd. When he stood up and faced the audience–with his 3-D glasses on–the roof almost caved in from the applause. He cried.

“It was an incredibly moving moment.”

The Mill Valley Film Festival box office is located at the corner of Blithedale and Throckmorton avenues in Mill Valley. For program and ticket information, call 415-383-5346.