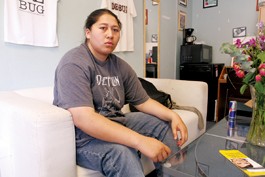 Making of a Millennial

A friend once told me that as California goes, so too goes the country. If that’s the case–that our state is a glimpse into the future of trends, culture and politics–what then is the future of California? There is no crystal ball, but getting a poll from young people as to how they see their lives and their futures may be as close to it as we’re going to get.

New America Media based in San Francisco recently conducted such a poll with 600 young people across the state from ages 16 to 22. Produced in association with the firm Bendixen & Associates, the end result is a report called California Dreamers: A Public Opinion Portrait of the Most Diverse Generation the Nation Has Known.

The title reflects a sentiment that seemed to rise out of the numbers across geographic, racial and even class distinctions: this is a generation that is redefining race, community and even the American Dream.

New America Media and Bendixen have a history of tapping into the usually unheard opinions of America, having developed the first multilingual poll a few years back and polling on issues such as how immigrant communities feel about the immigration debate, how Latinos feel about higher education and how Asians felt about tsunami relief.

Most of these polls revealed a sentiment that was often contrary to the English-only polls. To get an accurate barometer of young people, New America Media went again to the language of its target population: technology; the poll was conducted entirely through cell phones. The youth surveyed were surprising, hopeful yet grounded, when they answered questions about their educational and career goals, their stresses and fears and their relationships to one another.

Perhaps most striking were the responses to questions around race and ethnicity. Participants (who were given $10 for their time) overwhelmingly embraced the increasing diversity of the state in concept and practice. Over 80 percent said they think increasing racial and ethnic diversity is a good thing, and 65 percent said they have dated someone outside of their race. They anticipate racial barriers to break down even further in the future, with 87 percent of respondents saying they would marry, or have a life partner, outside of their race.

These trends toward inclusiveness hold true even when taken beyond the immediate relationship. Anti-immigrant sentiment is a more critical issue for this generation than racism or discrimination, the poll concludes. A dramatic 82 percent of respondents say they support giving undocumented immigrants a chance to earn legal status and citizenship.

Part of the redefining of race and ethnicity might also be due to this generation’s reinvention of identity itself. Indicative perhaps of the global culture, or the demographic shift of a post-minority generation (59 percent of respondents are youth of color and 49 percent immigrants or the children of immigrants), young people are more likely to define themselves by personal styles than by their race or ethnicity. When asked the question “What characteristic defines you?” the most popular answer was “music or fashion.” Young people are defining themselves more by what they do than by what box they check on the census.

In terms of framing what issues they feel most concerned with, young people ranked family breakdown and neighborhood violence as their top issues. Given the litany of options around them that were also on the survey–global warming, war, poverty and more–the choice of home and block was very telling. Jean Melesaine, a 21-year-old writer and organizer, says that she was not surprised. “We want what we haven’t had. Most of us grew up in broken homes, and we’ve seen the impact of that. We want to create what was not given to us,” she says.

It is, perhaps, this sense of building that has fueled this generation with a spirit of optimism toward the future of California. Despite staggeringly defeating numbers of increasing incarceration rates, climbing college tuition, soaring housing costs, young people say they will do better than their parents. And not only do they think they will do well–78 percent of respondents said their lives will be better in 10 years–it is their belief in how they will achieve their goals that is surprising. Contrary to the natural skepticism associated with youth, 96 percent said this statement best describes their view of the future: “If I work hard, I can achieve my goals.”

Oddly, when asked to name the career of their choice, a small, yet significant number, about 25 percent, said “sniper” or “sharpshooter.” Bendixen had no explanation for the answer.

That 25 percent aside, which is either hoping the war in Iraq will last or likely just got too attached to their video games, the findings of the poll should give us confidence. Sandy Close, executive director of New America Media, says that the findings are as much about today as they are about tomorrow.

“These young people represent the forefront of the cultural continuum,” she says. “To gauge their hopes, fears and perspectives about the future is to glimpse who we are becoming as a society.”