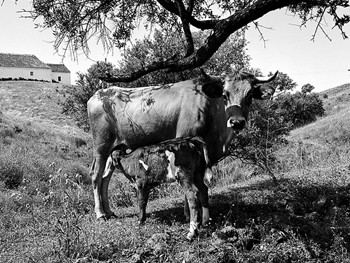 Meat Is Murder?: What lobbyists don’t know may hurt us.

One year after the first case of mad cow disease in the U.S. was confirmed, promised food safety reforms have yet to be instituted. And they never will be, if the cattle industry has its way.

For a while, it looked as though one lone cow might succeed. Government officials promised to implement food-safety measures long championed by consumer, family-farm, health, environmental and public-interest organizations. Industry groups–and their former lobbyists now working for regulatory agencies–were on the defensive.

That was Dec. 23, 2003, and the first case of mad cow disease in the United States had just been confirmed.

Within a week, the U.S. Department of Agriculture announced that so-called downer cows–animals too sick or injured to walk–would be banned from the human food supply. Representative Gary Ackerman, D-N.Y., who had unsuccessfully championed a downer ban for years, offered qualified praise.

“We’re pleased that the Agriculture Department is finally banning downed animals after fighting with them for so long to do so,” he said. “The department has seen the light, but that’s only because they’ve been struck by lightning.”

However, that lightning produced more noise than illumination. One year later, reforms proven necessary by the experiences of European and Asian countries have yet to be instituted by the agencies most responsible for food safety: the USDA and the Food and Drug Administration.

Why does mad cow disease matter? Most immediately, because it’s a fatal, neurodegenerative disease that spreads from animal to animal–and from cows to humans–through the food supply. In Britain, the “ground zero” for mad cow disease, 147 people have died from variant Creutzfeldt-Jakob disease, the human form of the illness, and five others have been diagnosed with it. In addition, 3.7 million cattle were destroyed and many family farmers and ranchers went bankrupt.

There’s another reason why mad cow disease is important–even for vegetarians. Like the Merck Vioxx and Enron scandals, the issue reveals how compromised our regulatory agencies have become.

Through lobbying, campaign contributions and the industry-government revolving door, the meat and feed industries have shaped relevant policy from the beginning. In noting the anniversary of last year’s scare, the Sacramento Bee recently reported that “consumer groups were shut out” of the process for developing the mad cow risk-analysis model regulatory agencies rely on. Among those acknowledged for “scientific input and support” are people “with ties to ConAgra Beef, the National Cattlemen’s Beef Association, the National Renderers Association and the American Feed Industry Association,” the paper wrote.

Instead of implementing real reform, over the past year government officials and industry flacks have instead oversold limited policy changes, touted questionable polls and studies, and relied on slick public relations to maintain confidence in the U.S. food supply. (Japan, which formerly imported one-third of all U.S. beef products to the tune of $1.2 billion annually, remains unswayed.)

For example, feed for cows and other ruminant animals may still contain cattle blood and fat, chicken coop waste, and pig and poultry slaughterhouse waste. All of these materials present possible routes of animal-to-animal disease transmission.

In January 2004, the FDA promised to close these gaping loopholes in what most government press releases refer to as the “firewall feed ban.” At the time, the now-outgoing Health and Human Services Secretary Tommy Thompson explained, “Although the current animal feed rule provides a strong barrier against the further spread of [mad cow disease], we must never be satisfied with the status quo.”

Six months later, Thompson announced that the FDA was indefinitely delaying action. Consumers Union called the stonewalling “a betrayal of a promise made to consumers to protect their health.” The FDA’s déjà vu-laden inertia can be chalked up to vigorous lobbying. The American Meat Institute blasted stronger feed regulations as “unwarranted.” The National Grain and Feed Association called them “draconian.” Eight cattle and feed industry groups warned the FDA that the proposed regulations would “cause economic dislocation throughout the livestock industry.”

Washington listened. In 2004, nearly 80 percent of campaign contributions from the livestock and meat processing and products industries went to Republicans, according to the Center for Responsive Politics. In August the grande dame of meat politics, the National Cattlemen’s Beef Association (NCBA) announced in a press release that it was taking a “historic and unprecedented action in the organization’s 106-year history by directing its political action committee to endorse Bush-Cheney for reelection.”

Furthermore, according to Tactics, the newsletter of the Public Relations Society of America, “Key messages for [meat industry] spokespeople to reinforce in media interviews” include the mantras that “U.S. beef is safe,” “the [mad cow disease] surveillance system worked” and “regaining access to export markets is a priority.”

It might take another mad cow–or 10 or 20–to shock U.S. regulatory agencies into action. The main concern of Agriculture Secretary nominee Mike Johanns is international trade, as was the case with outgoing secretary Ann Veneman. Moreover, Johanns is on record as opposing the USDA’s refreshingly open policy of announcing the result of rapid tests used to screen cattle for mad cow disease.

Transparency and stronger safeguards benefit everyone, building real confidence among domestic and foreign markets, not to mention protecting human and animal health. Perhaps the Bush administration and its industry friends will realize this sooner, rather than later.