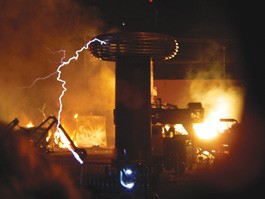 “The Motoman UP50 is a high-speed robot with a streamlined body that requires minimal installation space,” reads the promotional copy on Robots.com. “The UP50 offers superior performance in applications such as machine tending, handling, and material removal.” What the Motoman UP50 becomes when transmogrified by a group of artists, however, is an entirely different matter.Those artists are grouped together under the umbrella of the Survival Research Lab (SRL), a performance-art collective founded in 1979 that is devoted to using machines built for war and industrialization and turning them to matters more human. Like blowing stuff up.

But explosions, sparks, flares and the admitted lure of lurching machinery as developed by SRL don’t destroy the world or hurt fellow humans. Rather, these Maker Faire darlings make and alter industrial robots for purpose and for fun.

Comprising engineers, electricians, carpenters, artists and others who want to use their professional skill sets for work other than their day jobs, the SRL makes art out of industry, and asks: What happens when a machine built by humans to rain war down on other humans makes art instead? The answer is found when SRL brings its altered version of the Motoman UP50 to the Sonoma County Museum for a rare one-time performance on Saturday, Oct. 30, as part of the museum’s new exhibit, “Mad Science: Experiments in Kinetic and Robotic Art.” Promising a “mechanical street seizure,” the altered Motoman will work the street in front of the museum, amazing the nine-year-old boy in everyone.