Amy Poehler and friends go on a 'Wine Country' bender 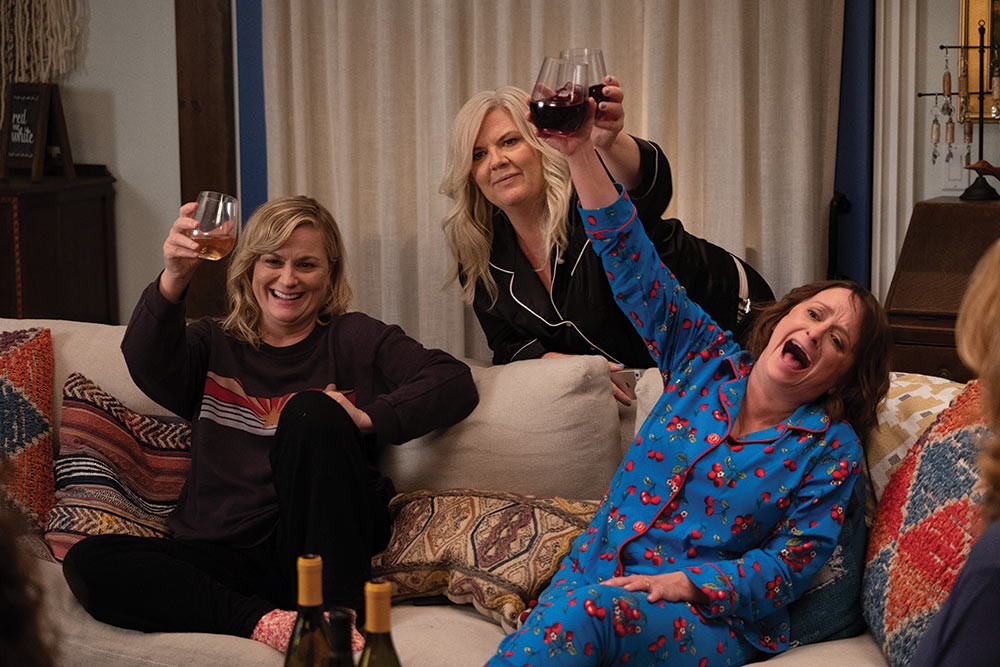 Amy Poehler, left, and a cast of SNL alums have a bawdy, wine-soaked time in ‘Wine Country.’

Take your average girls’ getaway. Pair it with a booze-induced romp through Napa Valley. Wrangle some of Saturday Night Live‘s finest comedians and put Parks and Rec star and SNL alum Amy Poehler at the helm: Enter the recently released Netflix film, Wine Country. Muumuus are worn, wine is guzzled and DUI playlists take over the dance party airwaves in the ultimate weekend-long birthday bash.

The film was born out of a real-life trip Poehler took to Napa to celebrate Rachel Dratch’s (who stars alongside Poehler) 50th birthday. The cast boasts other SNL alums including Ana Gasteyer, Paula Pell, Emily Spivey (who also co-wrote the screenplay) and Maya Rudolph, who plays weary mom Naomi, and delivers one of the first spit-your-wine-out lines of the movie, “Mama needs to rock out with her cock out.” The scene perfectly sets the table for this boozy ballad about womanhood and friendship; aimed at anyone who has ever fought to figure her life out; and done so, surrounded by girlfriends who swear, fight and swill in the name of friendship.

Prior to a wide release on Netflix May 10, Wine Country screened May 5 at the Cameo Cinema in St. Helena, part of the Napa Valley Film Festival’s (NVFF) year-round programming slate. The event was preceded by a VIP reception at Martin Showroom, where wine flowed and food from the film was featured, including the “lavender popping corn” on a stick, which was the butt of a snarky joke in the film.

“This is our first event of the season,” says Whitney Haskin, director of programming for the NVFF. “We have plans for future events as part of our partnership with Netflix.” After the screening, Whitney offered this about the film: “It had this really beautiful arc about being a woman, in your 40s, 50s, 60s, and what that means to still be friends.”

Tina Fey floats in and out of the film as the bawdy Airbnb host Tammy, who delivers classic one-liners like, “Whatever gets said, it’s probably what the person has always felt and the alcohol just let it out.”

Jason Schwartzman fills the token-dude slot, as a hilarious girl Friday who acts as the houseboy, chef and bus-driving tour guide who “comes” with the house—in more ways than one.

Hilarity ensues when Pell’s character test drives her new set of knees by cartwheeling down the main drag in Calistoga.

Other scenes in the town were filmed last May, when Lincoln Avenue was shut down to accommodate the shoot. “It was an absolutely great experience,” says Calistoga Chamber of Commerce marketing and communications director (and occasional Bohemian contributor) Charlene Peters. “The film will give a lot of exposure to Calistoga which is a really great thing. As a destination we are absolutely thrilled this movie is coming out and hope it sparks an interest for people to come to the top of the Napa Valley,” says Peters, “where the legend began.”

In another Calistoga scene, Poehler and her pack roll through town bedecked in Welcome Center swag, with gigantic wine goblets in hand. “They were wearing those wine glass sunglasses and all the other goofy gear that every tourist who comes here has to have,” says local resident Christy Fitzpatrick-Webb, an extra in the film. “They were a hoot and a holler.”

The film parodies the tasting room experience to high comedic effect, including a bit that was shot at Artesa Winery in Napa. A techno-wine-geek-speaking tasting room guy plies Poehler’s inattentive crew with wine country factoids and invites them to comment on the wine. Dratch’s character Rebecca says, “It tastes like canned peaches.” Rudolph’s Naomi tastes lemon and jasmine. The tasting pro is quick to correct. “You don’t taste that. You smell it.” Poehler lobs back, “All they ever want to do is talk about wine.” This theme of getting past the tasting lingo in favor of the wine-guzzling repeats throughout the film with each situation upping the next.

The movie does a clever job mining the inherent comedy built in to the tasting room experience, when seasoned staff try to educate uninterested tourists who want nothing more than to get loaded. The point is furthered when Poehler drags her crew out of the winery while the hospitality guy guns for a sale. She declines with a curt, “Thanks, but no thanks, we’ll buy it on Amazon.”

Another scene that pokes at tasting-room experiences takes place at a property adjacent to Baldacci’s public tasting room. Rudolph, as seen in the film trailer, belts out a boozy rendition of the Bangles’ Eternal Flame before falling off the piano.

The tasting unravels when the hospitality person, played by an amusing Liz Cackowski (who co-wrote the screenplay with Spivey), asks if anybody notices the sediment in their wine glass. An impatient Poehler deadpans, “Would you just tell us,” furthering the notion that some tourists care little about wine nuances and more about cramming in as many tastings in as possible. Cackowski’s sunny character, Lisa, remains undeterred as she continues with a dissertation on tartrates and wine diamonds, before she politely insists that nobody walk through the organic vineyards. This prompts Rudolph and Dratch to do just that.

Kellie Duckhorn, general manager at Baldacci, had reservations about being one of the Napa Valley locations, due to concerns over how the region might be portrayed in the film. “We’ve all worked very hard to make the valley approachable,” she says. “But a lot of times it comes off as being inaccessible or pretentious, and that is not the Napa Valley we know and love.”

Despite her initial hesitancy, the experience was a positive one, says Duckhorn. “We were so impressed by the level of professionalism of the production crew. And the shoot was really fun,” she says. “Our location was made in to this crunchy granola–type winery, which suited us just fine and went along with our value set. We make spectacular wines, but don’t take ourselves too seriously.”

Comedic situations continue to unfold as the film bounces between several over-the-top moments, some that stray from the truth. Once such scene comes when everyone files in from a less-than-abundant dinner with fistfuls of food from McDonalds. Let the record show there are no golden arches along the rural routes of Napa Valley.

In other tomfoolery, Schwartzman’s character chases down a rogue cuttlefish that ultimately lands in a massive trough of paella, which he stirs with a canoe paddle. This humor hits a high note when Schwartzman beds Poehler’s character, who sports a CPAP machine during and after sex. He awakens with a flourish and says, “I would love to snuggle, but I have to stir the paella,” which he does, for the duration of the movie.

The film doesn’t stop with playful pokes at Napa Valley. It taps everything from aging and unemployment to cancer and generational battles, including an epic showdown between a middle-aged posse led by Poehler, and a pack of millennials.

The film’s denouement comes when Rudolph’s character is bitten by what may (or may not) have been a snake. The encounter sends everyone rolling down a hill to escape. It’s in this scene that the true heart of the story unfolds. Tears are tossed, cliffside confessions unfurl and the realization comes that the bonds of female friendship can never be broken.

If the crowd at the NVFF screening is any indication, the movie will resonate with and entertain locals. One who shared her impressions following the film says, “I thought it was terrific and really fun with some good meaning behind it.”

As for the portrayal of Napa Valley, she says, “It was perfect. The location stood out as being the really cool place that it is. I haven’t heard an audience laugh that much in forever.” Someone else added, “It made me miss my girlfriends.”

Beyond the gags and boozy tirades and tumbles, Wine Country is, at its core, a love letter to women, lifelong friendships—and the Napa Valley, which plays one hell of a sidekick.

Next ArticleEmerald Cup Heads to England