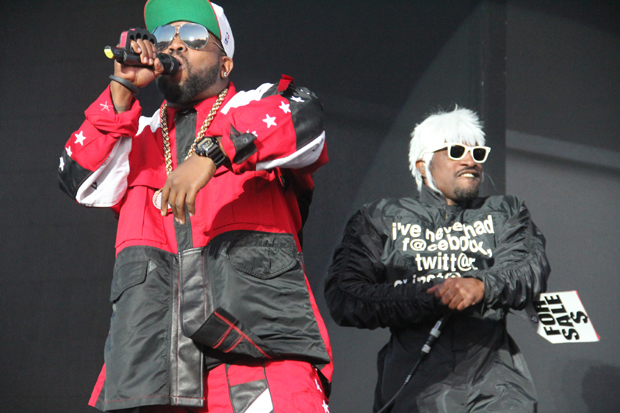 By Nicolas Grizzle
Jun 1, 2014
It’s 2am and this is what I’m feeling after getting home from Bottlerock’s biggest and best day: tired, deaf, a little hungry, tired, thirsty as hell, musically fulfilled, nostalgic, sore, tired, and, most of all, happy.

We arrived just in time to see Trebuchet kick off the day on the local stage, representing well with power-packed singalongs and sky-blue, skin-tight pants. It’s not common to attend a festival from gates open to gates closed, as evidenced by the Napa music festival’s growing food and beer lines, and swelling crowds at the five music stages throughout the day. But with 60 bands in three days, it felt appropriate to try and match the feverish intensity of producers Latitude 38, a local group new to the festival business, and pack in as much music into our day as possible.
After watching the Petaluma-Napa indie folk quartet, it was off to the beer garden and food court, where I couldn’t resist posing for a photo with the larger-than-life portrait of Masaharu Morimoto next to his eponymous restaurant’s booth. A pulled pork sandwich from Napa’s the Thomas restaurant topped with cotija and a roasted padron pepper made for a perfect lunch. When food this good is available, why settle for a corn dog?
The next band we caught was No Age, who brought a punk vibe to the third-tier stage (of five), the Miner Family Winery stage. The guitar and drum duo sounds bigger than just two, with the drummer taking on vocal duties. They were especially polished, and it was nice to hear them sound so good (they’re usually in clubs with questionable sound quality). “Fever Dreaming” was a standout, with the guitar’s effects really shining through. A young, somewhat energetic crowd tried to get into it, but alas, it seems No Age might have been out-hyped by Matt & Kim, duo reminiscent of Mates of State, playing simultaneously on the main stage (the official festival app showed 1,496 people put Matt & Kim on their personalized scheduled to No Age’s 75). When the punk duo No Age finished, the crowd started forming for Smash Mouth, who was next up on the same stage.

The harbingers of ‘90s nostalgia (“Walkin’ on the Sun,” “All Star,” “Can’t Get Enough Of You Baby”) did not disappoint. People barely old enough to be alive when their hits were new knew every word, and one young man near us declared Smash Mouth to be the “best band in the world.” Smash Mouth showed they are entertaining, flashy and have wide populist appeal—in a way, they’re the musical equivalent of Guy Fieri.
But then the mud slinging began, with Steve Harwell, Smash Mouth’s lead singer, making a fairly inappropriate suggestion to Third Eye Blind. The other ‘90s nostalgia band was playing at the same time on the main stage, and Harwell mentioned something about that band’s leader, Stephan Jenkins, firing his band and hiring other musicians to fill in on tour. Harwell’s friend, a former Third Eye Blind guitarist, had formed a new band with the Smash Mouth singer, and they played a couple of awful songs together between Smash Mouth tunes. He was sticking up for his friend, but only served to make the feud seem petty and made both Third Eye Blind and Smash Mouth’s music seem that much better.

Weezer was playing on the main stage next, and we all tried to leave the third-tier stage for the main stage, only to realize that the one thoroughfare was far too small to accommodate the massive Smash Mouth fan base. The first blip on an otherwise superb festival was popping up: it was too popular. We were like cattle in a factory farm trying to get through Bottlerock’s bottleneck, but at least we kept moving. Once at the main stage, there was more room to move around, and we could all breathe again.
Weezer opened with “My Name is Jonas,” the first song on their groundbreaking Blue Album. Good thing they started with one everyone knows, because the sound went out a minute after they began, prompting a sing-along from the crowd. Stagehands dove to piles of cables near the speakers, trying to identify the problem. They fixed it before the end of the song, and Weezer, the consummate professionals they are, did not skip a beat, lyric or riff. They finished the song and didn’t even mention the snafu. “Say It Ain’t So” proved to be even more powerful live than on record, though I couldn’t tell you what Rivers Cuomo’s voice sounded like on that song because the chorus of 30,000 voices, including my own, overpowered the speakers. I would only ask Weezer to stop pretending like their album Pinkerton doesn’t exist—a couple of songs from their second album would make for an awesome addition to the setlist.
My friend Schell and I packed in close in anticipation of Outkast, making it into the front 10 percent of the crowd before they started a few minutes late. The Atlanta hip-hip duo of Andre 3000 and Big Boi was unveiled in a steel cage cloaked in black mesh, the familiar beat of “Bombs Over Baghdad” vibrating my skull in time with the bass hits. Subwoofers dominated all sound for the first three songs, but it settled down after that (or my ears built up a natural defense by then), and the diverse crowd really started kicking up dust with their dance moves. That’s when things got interesting.
The physically imposing woman with no sense of personal boundaries was tolerable for a time, but then the unwelcome grinding began taking its toll after her exuberant back side had been having its way with just about everyone in vicinity, especially me, it seemed, and about an hour. About the time I was pushed into the center barrier, when it seemed like the right time to call it quits and just get out of there, the smell of human waste began wafting through the air. Cries of “Oh my god they’re pooping! They’re pooping!” resulted in a pushback of meteor-impact proportion away from the offender, and Schell and I decided to take our cue and brace the crowd to escape the chaos.

On our way out, we happened to be in a clearing when “Hey Ya” started. The inescapably catchy hit inspired everyone to stop and “shake it like a Polaroid picture,” and all was right in the world again. A woman in a motorized wheelchair broke the spell when she rolled up to a girl dancing next to us, punched her in the stomach, and yelled at her for being in the way before speeding off. The girl had no idea what had happened, and she was still distraught when Schell and I left to look for the exit. The prospect of actually leaving the festival became more daunting when an usher at the VIP section entrance couldn’t point us in right direction. It was like taking a spill off a surfboard in a big wave, we had no idea which way was up, out or around. We saw some flashing lights and decided they were our best hope for survival.
We soon discovered the silent disco—a live DJ dance party with sound only coming through wireless, LED-flashing headphones. Schell had some wicked moves, but I was more moved by watching the dancers do their thing while I removed my headphones and listened to Heart from the second stage. It’s surreal to see everyone dancing to what sounds like the wrong beat, and it gave me a chance to catch a little bit of the Wilson sisters, who added some Led Zeppelin to their stable of hits for the evening.

This is the second year of Bottlerock (it’s the first year for new producers Latitude 38), and concerns from last year like dust in the eating area, late night curfew and others were mitigated. But this night revealed the inevitable hiccup. Most of the estimated 30,000-plus festivalgoers were just now leaving, and most were taking shuttles back to their cars two miles away. First problem: only one small exit. Second problem: no direction in forming the line. People leaving the main stage clashed into people who thought they were in line for the exit (turns out, after an hour of waiting, we weren’t in any line whatsoever). As Schell put it, “If this were the Tron motorcycle race, we’d all be dead.” People began to get physical, things got heated all around us, and we ditched the line to wait it out in the grass near the local band stage.
We ended up getting a ride from a friend back to our cars at Napa Pipe, the Scooby Doo-esque abandoned industrial site two miles away from the festival site. (Had that not happened I fear we might still be at the Napa Expo). After being dropped off, it was still a mile walk to our car. We ended up back in Santa Rosa after 1:30am, after leaving—or trying to leave—at 9:30pm. Even considering traffic and slow exit times are to be expected at any festival, this experience was unreasonable—hopefully they’ve got it sussed out by tomorrow night. Even still, the high of seeing Outkast on their first tour in eight years stayed with us, and Schell had a tape of Queen’s greatest hits in his car—Bohemian Rhapsody is the ultimate post-festival traffic congestion anthem, after all. We returned home grateful and tired, stoked to have seen some of the best bands from youth show us they’ve still got that mojo we remember.
Share
Facebook
Twitter
Linkedin
WhatsApp
Email
Print