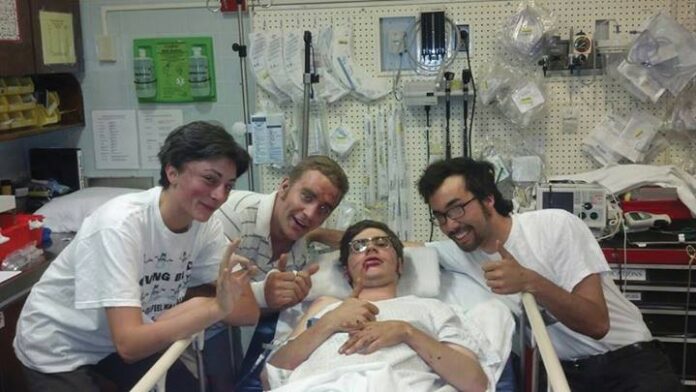 “We’re all very lucky to be alive,” says Kalei Yamanoha, accordionist for Gypsy-klezmer project Oddjob Ensemble, the day after a horrific car accident on I-80 in Nevada. The crash happened at about 5pm as the band, which features members of Church Marching Band and the Crux, headed to play some shows in Colorado.

“The driver hit the rumble strip on the side of the road, veered off and overcompensated,” says Yamanoha. “The car started veering back and forth, lost control and we flipped four times into the median.”

Everyone was wearing their seatbelts, and once the 1995 Mercedes station wagon stopped—landing upside down—all inside were able to walk away. “When we all crawled out of the car, we were covered with blood and dust,” explains Yamanoha. “It was like a scene out of a zombie movie.”

Within minutes, about 10 Samaritans, including an off-duty EMT, stopped to help. Clarinetist Travis Hendrix busted his lip, fiddler Annie Cilley hit her head and cut her shoulder on a broken window, trumpeter Josh Jackson got minor abrasions to the head and arms, and Yamanoha suffered tissue damage in his back. An upright bass and violin were destroyed, and the car was left totaled in a Nevada tow yard.

But the accident won’t stop the musicians from getting back out on the road. There’s a Crux tour in a month, and Church Marching Band plays the Wunderkammer Festival in Santa Rosa’s Railroad Square on Aug. 25.

“The way the accident happened, I’m surprised we’re all walking and OK,” adds Yamanoha, the shock still evident in his voice. “This is what we do for a living, so we’re not going to stop.”