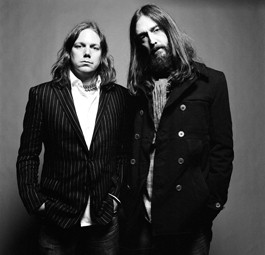 Southern rock has proven to be one of rock’s most enduring subgenres. Since its ’70s heyday of the Allman Brothers and Lynyrd Skynyrd, there’s been an evolving flow of new acts that put modern twists on the hallowed traditions of guitar-layered, swampy, jazzy, bluesy, gospel-based and regionally biased American roots rock. Popular touring acts like Gov’t Mule and Widespread Panic jam for the festival crowd, while alt-rockers like My Morning Jacket and Drive-By Truckers are more about sonics and songwriting than smoking instrumentals. Current mainstream country music offers palatable and predictable Southern rock, while metal bands like Down and Black Stone Cherry pitch a more seething edge.

In this ongoing Southern rock mix, the Black Crowes are a reminder of the past. Their new studio disc, War Paint (self-released on their Silver Arrow label), is sweet, shuffling, slurred and swirling classic rock, based more on Rolling Stones&–style classicism than any offshoot flavor of Southern rock. Since the band’s last studio album, 2001’s slightly psychedelic Lions, the brothers Chris and Rich Robinson have toyed with solo albums, live albums and side projects; War Paint is, for better or worse, a return to traditional form.

With an ever-changing lineup, the Crowes now employ second guitarist Luther Dickinson from the North Mississippi All Stars, whose lead work against Rich’s rhythm is more complementary than stinging. Yet there’s a reason the band has started some shows on their current tour performing War Paint in its entirety before playing hits. From the rollicking tease of “Goodbye Daughters of the Revolution” to the raspy gospel cover “God’s Got It” to the Band-like lament “There’s Gold in Them Hills,” the disc is a deep and appealing slice of roots rock.

Given their appreciation of American roots music and their liberal cultural stance (“War is wrong / Stop the war” boasts the multi-ethnic album art, as if to challenge redneck fans), it’s hard to imagine why the brothers recently sued country singer Gretchen Wilson, accusing her of ripping off their classic rocker “Jealous Again” for her new hit “Work Hard, Play Harder.” Parts of the verses are similar, for sure, but the Robinson brothers should be smart enough to see that Wilson’s song, just like their music, is simply part of a great ongoing stream of Southern rock tradition.