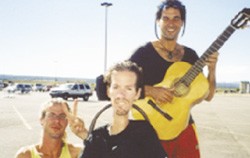 '39 Pounds' and other films enable the disabled

In a suburban Tel Aviv backyard, a man celebrates his 34th birthday with family and friends. Bottles crowd the table, festive lanterns are hung and Mom and Dad are enjoying the odd outdoor cigarette. Then the man drops a bombshell. He’s leaving, going to the United States; he simply has to. “You can’t go. I can’t allow it,” his mother says. What 34-year-old man, a 3-D animator by profession, allows his mother to dictate his comings and goings? Not this one, even though he weighs only 18 kilos–39 pounds–and has the muscular use of just one finger on his left hand.

So begins the documentary 39 Pounds of Love, screening Aug. 10 at the Rialto Lakeside Cinemas as part of the month-long Disability Film Series. Ami Ankilewitz, the recalcitrant birthday boy, was born in Texas to a Mexican mother and Israeli father. Burdened with a rare disorder known as spinal muscular atrophy, the boy was given just six years to live. Robust at birth, he has wasted relentlessly during his life, his arms as thin as a woman’s wrist, his legs and torso useless, his head huge with weight and strength and a canny intelligence contained entirely within his eyes.

At first sight, Ami is shocking to behold, and filmmakers Dani Menkin and Daniel J. Chalfen don’t shy away from showing public reaction to Ami. Visiting a Tel Aviv park, elderly women are seen scooting away from his approach to a bench as though he were on fire. Ami is sanguine. As we are soon to learn, he is nothing like he appears.

Sporting a Harley-Davidson tattoo on his miniscule bicep, with a taste for Jack Daniels straight from the bottle and conversant in three languages, Ami is an entire and full person. 39 Pounds shows us most heartbreakingly just how full, for Ami is in love with Christina, his Romanian-born caretaker. A breathtaking young woman with a gorgeous, expressive face, Christina has a matter-of-fact way of slinging Ami out of the tub and onto the bed, her lithe, strong body doubtlessly maintained by three years of carrying him around. She accompanies him to beach bonfires and bars, adjusts his straw so that he can better drink his beer and joshes him gently. She loves him, but isn’t in love with him. In classic European manner, Christina tells the camera and Ami, both, that she just can’t feel that for him. His face softens. He reflects. She must go.

Banishing Christina, Ami decides to go to the United States to confront the doctor who told his mother that he had only six years to live, to show the man that, as he says, “one must never give up hope for life and for love.”

And so 39 Pounds of Love becomes a road trip–replete with the requisite breakdowns, set-backs and surprises that mark any great adventure–as a seven-person Israeli film crew accompanies Ami in a rented Tioga camper across the United States.

Sprinkled throughout is Ami’s own 3-D animated film, the story of an awkward bird–one with an impossibly heavy head like his own–who is rejected by the lady bird of his dreams. The filmmakers allow sentimentality its only rein here, but such missteps are few. Ultimately, 39 Pounds of Love serves as a fascinating portrait of a fully realized person, a man of huge intelligence with an enormous capacity for love, who doesn’t allow the mere hindrance of his body to restrict the limitless possibilities of his life.

’39 Pounds of Love’ kicks off the Rialto’s Disability Film Series, showing each Thursday through August. Of special note is the Aug. 24 collection ‘Crip Shots,’ short films that examine the lives of the differently-abled through dance, poetry, interview and performance art. All screenings are at 7:15pm. Rialto Lakeside Cinemas, 551 Summerfield Road, Santa Rosa. 707.525.4840.