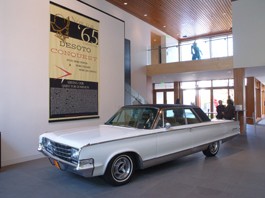 In a conversation that ranges from the early days of the U.S. nuclear weapons program to pondering the question of when the ordinary becomes extraordinary to discussing America’s schizophrenic desire to be a royalist monarchy within a democracy to defining what makes one object a counterfeit and one a simulacrum, one is really just talking about cars.Not any cars, of course. Old cars, like Chryslers. Hard-working autos, like GMC pickup trucks. The 1966 Dodge that led to a lifelong obsession. The mid-’60s Beetle that carried its own emergency fuel. Cars as ready-made objects. Cars poised for meticulous alteration. Art cars.

Midcareer artist Lewis deSoto, 54, whose résumé prints out at nine single-spaced pages, is a master of many genres. His breadth is actually breathtaking, moving fluidly as he does between conceptual installation work to photography to environmental land art to such public works as that found at San Francisco International Airport. His sculpture of the Buddha at his death, Paranirvana, is a 25-foot-long “balloon” made of cloth that features deSoto’s own visage for the face and is inflated with a fan during the day and deflated for both practical and metaphoric reasons each night. One version of the sculpture is owned by San Diego’s Museum of Contemporary Art; another has toured the country to great acclaim for almost a decade. He currently has a small one-man show, “Tales of Power,” at the di Rosa Preserve’s Gatehouse Gallery, which only recently opened its space to work not already found in collector Rene di Rosa’s personal holdings. Seated in his comfortable Napa home, deSoto admits to a certain restlessness that allows him to work on so many projects at once. “I get easily bored, so I tend to work in flashes,” he says. “I work on something for an hour and then I’m done. I’ll move to another thing and work on that for an hour. Sometimes I’ll even watch the clock and wonder how I’ll be able to stay working on something for another 10 minutes. Then I leapfrog to the next one.”

Consider a work like Conquest. A 1965 Chrysler New Yorker refashioned to imagine a fictional 1965 Chrysler DeSoto, Conquest is what an auto collector would deem to be “cherry.” In stunning, completely refabricated condition, Conquest is a counterfeit, a fiction. For example, Chrysler certainly never had an electron-microscope image of a smallpox spore nor a slim gold sword adorning its vehicles as Conquest does. Nor was it likely to consider its vehicle as an information conduit for European oppression of New World peoples.

The artist was naturally drawn to a vehicle with which he shares a surname. Perhaps less affectionate is his relationship to his centuries-old relative Hernando de Soto, one of the Spanish explorers who conquered the Incas and whom Chrysler honored with their trademark. Installed on the wall behind the vehicle is a long proclamation purportedly given in Spanish by de Soto to the Incans. The pope is the manifestation of God on earth, it reads. The king and queen are anointed by the pope. They demand your wealth and your land. If you resist, you will be killed. And, as this is ordained by God Almighty Himself, your death will be your own fault.

Conquest sports a vintage window sticker as if it were in a showroom. The Spaniard’s proclamation is replicated as the fine print. DeSoto the artist occasionally takes Conquest to traditional car shows. He also drives it on city streets. How does the vehicle manifest itself as art when it’s being judged for its “cherry” factor, how when on the street and how again when placed in a gallery? In which case is the ordinary made extraordinary?

Untroubled by such questions, car nuts give him prizes because they believe deSoto’s fiction that he has replicated an unknown prototype developed by Chrysler.

The other sculpture placed at the di Rosa doesn’t try to pass as something other than what it is: a 1981 GMC pickup truck that’s been entirely refashioned to comment on the wealth gained by Native Americans after the laws changed in 1981 regarding gaming and sovereign nations. Simply titled Cahuilla, the piece again draws on deSoto’s own heritage, this time in a nod to the Cahuilla tribe, based near Palm Springs, to whom he is related on his father’s side. Loud with the sounds of native song taken from an old wax cylinder recording from the early days of phonographs mixed with the beeps and bings of a modern day casino, Cahuilla has 7-7-7 for a hood medallion, the mason’s eye found on the dollar bill for a side ornament and lights flashing under the engine. But more subtle alterations deserve notice.

The cab’s upholstery is a blown-up reproduction of the edge of a 100-dollar bill which deSoto had woven for the piece. “When it’s abstracted like that, looks a lot like a Navajo image,” he says. The blanket covering the truck’s bed appears to be of indigenous design but is actually an outline of a craps table with the fabric woven with real silver and gold thread. The images that adorn it are taken from Cahuilla basket designs. “It’s a conceit to the idea of them being ‘crafts,'” deSoto says. “Indian crafts came about as a survival mechanism, a way of them being able to make money to survive.”

Back at his home, deSoto’s newest acquisition awaits transformation. A 1956 Chrysler Imperial sits in his driveway getting its first sanding before repainting. A massive vehicle, the Imperial sports images of eagles with crowns and a heraldic badge covering the trunk’s keyhole. “I like that confusion that we have in America about are we kings?” deSoto chuckles. “Are we a republic, are we a monarchy? We get confused. This car has a bit of that confusion: it’s Imperial, yet it’s American, so what does that mean?”

Citing Chrysler’s long relationship with the defense industry, including building the intercontinental ballistic missiles that eventually became space-program missiles, deSoto is considering putting a rocket roof rack on the Imperial or placing a bomb in the thing.

Opening the trunk, he unknowingly strikes metaphor. “I’ve got a lot of space,” he says aptly, “to work with.”

Lewis deSoto’s ‘Tales of Power’ shows through July 19 at the di Rosa Preserve’s Gatehouse Gallery. A discussion with deSoto and writer Anthony Torres is slated for Thursday, June 26, at 7pm. 5200 Carneros Hwy., Napa. 707.226.5991.