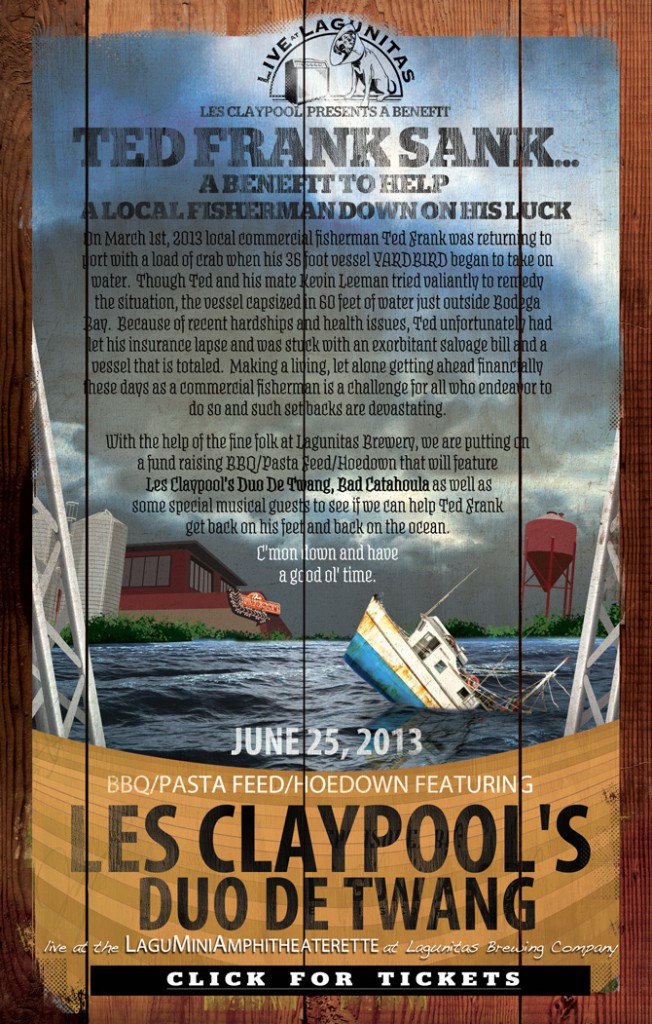 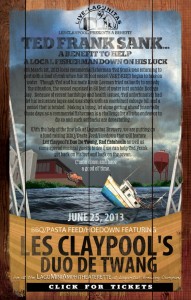 Les Claypool’s soft spot for fishermen extends beyond his 1991 ballad “John the Fisherman,” an epic tale of oceanic adventure from “Sailing the Seas of Cheese.” The Primus frontman is playing a benefit concert with his Duo de Twang at Lagunitas Mini Amphitheater Tuesday, June 25.
It’s a treat to see Claypool in such a small venue, and Lagunitas is a great place to see a band. Good beer, good food and an inviting atmosphere make for a memorable experience. And this time, it’s for a good cause. On March 1, local fisherman Ted Frank’s 36-foot boat, Yardbird, sank in 60 feet of water just outside Bodega Bay. He had let his insurance lapse because of recent hardships, and was left with a huge salvage bill, a totaled ship and no way to earn a living. It’s hard enough to make money as a commercial fisherman, but setbacks like this make it almost impossible.
That’s where Claypool comes in. He’ll be slappin’ da bass (a dobro bass, at that) at 5:45pm, with dinner beginning at 4:20pm. Bad Catahoula is also playing, as well as other musical guests. Tickets are $50 for the concert or $75 for dinner and concert. Lagunitas is located at 1280 N. McDowell Blvd, Petaluma.

This video is great. First of all… Larry Lalonde has purple hair. Secondly, dig that Mike Patton haircut on Les (or did Mike have a Les Claypool haircut?). And can you spot Metallica guitarist Kirk Hammett?