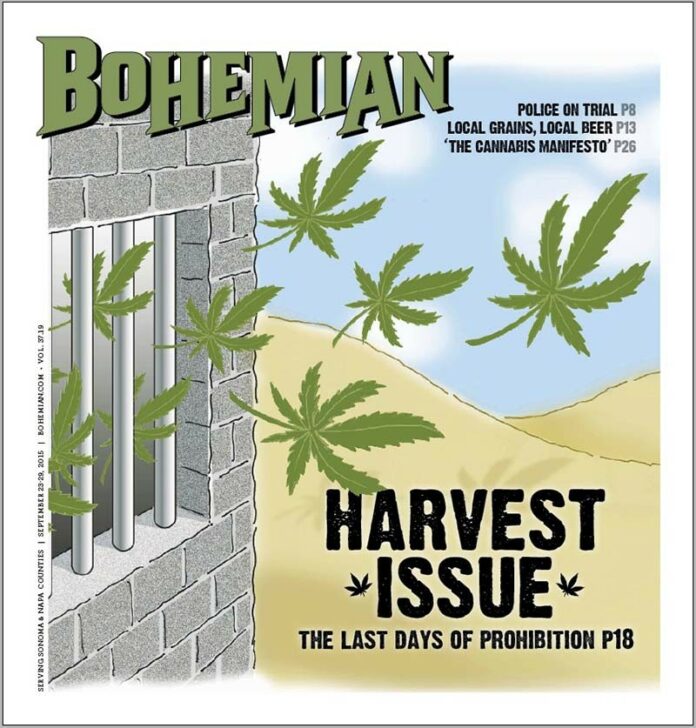 What’s in store as California heads toward the legalization of cannabis?

It’s harvest time in the North Bay, and that means two things: grapes and marijuana. For this year’s harvest issue, we thought we’d take a look at the latter crop, because this is a special year for Northern California’s cannabis industry. All signs are pointing to a ballot measure in the November 2016 election that will seek to legalize marijuana, although what that legislation will look like is far from clear. We have entered the last days of prohibition, and we’ll be covering the subject as the clock winds down.

There are a lot of moving parts associated with the cannabis economy and cannabis culture, so this week we decided to talk to some of the players.

We wanted to know: What are your hopes and fears as the state moves to join Colorado, Washington, Alaska and the District of Columbia?

Twenty sixteen is lining up as a turning point for cannabis reform across the country. Numerous states are poised to push legalization efforts. California, with its 40 million citizens and voracious appetite for freedom (and cannabis)—along with large pockets of resistance to such things—stands at the vanguard of the next round of legalization efforts. There are approximately 50,000 cannabis-related businesses in the state and 350,000 workers. California is poised to be the tipping-point for a whole new national policy on marijuana. If it works in California, it may work in New York. And Florida. Texas is another story.

“Peace in Medicine hopes adult use passes,” says Robert Jacobs, founder of the Sebastopol dispensary. “It is clear that public support has increased over time. The fact that this subject is being discussed in presidential debates demonstrates the huge advances made on this issue. We must end the needless prosecution of citizens for growing a plant.”

In what is emerging as a common theme among legalization supporters, he wants to see small-scale growers and operators protected under any new legislation.

It’s one thing for small-population states like Colorado to go legal, quite another for the nation-state of California. California has a roaringly diverse set of interests, some competing, and they all need to put together an initiative agreeable to all parties, even those who aren’t keen on legalization (i.e., statewide law enforcement organizations, which uniformly oppose legalization).

In the meantime, all signs are pointing in the direction of cannabis emerging as a campaign issue this year. If you watched the Republican debate on CNN last week, you now know that Gov. Jeb Bush smoked pot in high school, but his mom is mad at him for saying so. Carly Fiorina clucked that the marijuana of today is pretty potent stuff. And you know that New Jersey governor Chris Christie would shut down the Colorado experiment; he’s promised a renewed federal crackdown on the herb if elected president.

So we are anticipating a heavy convergence of national presidential politics and statewide efforts to free the weed, and we sure hope Hillary Clinton can take a deep breath and inhale the reality: cannabis freedom is emerging as a key civil rights issue over the next few years.
So read on, and let us know your hopes and concerns.—Stett Holbrook and Tom Gogola

Hezekiah Allen’s hopes for legalization are clear: “What we’re working to do is end the injustice of prohibition.”

The hard part, he says, is coming up with legislation that makes matters better, not worse.

Any new law must address public safety by drawing a clear line between criminal enterprises and small-scale farmers and businesses, he says. It must regulate and protect environmental resources and clarify the law for small businesses. Getting those things in place is by no means guaranteed with no frontrunner initiative or legislation yet. The worst-case scenario would be two or more initiatives on the ballot, he says. With 50–60 percent support for legalization, competing initiatives could divide the electorate, leading to infighting within the cannabis industry and defeat at the polls.

He wants any new law to protect the thousands of people who work in California’s cannabis industry. Leaving them out would be disastrous, he says.

“That’s a really bad situation to put small businesses in,” Allen says. “What sort of crisis would we have we created?”

As he sees it, the best way forward is to work within the medical marijuana regulatory framework legislators in Sacramento passed last week, and to make sure any new legislation is consistent with it.

“I think the policy work has been done,” he says.—Stett Holbrook